X
Across the UK > London, East and South East > Vicar says community is shocked after grandfather killed in stabbing

Vicar says community is shocked after grandfather killed in stabbing

A community is upset and shaken after a grandfather-of-four was stabbed to death in a quiet London suburb after visiting his local pub for a pint on Saturday evening, according to a local vicar.

Keen jazz musician Allan Isichei, 69, the director of a building company, was attacked after leaving the Plough Inn pub in Southall, west London, where he regularly performs music.

Mr Isichei, who has three children with his wife Sandra, was walking to his home in St Mary's Avenue South, just a few hundred yards away, when he was knifed twice.

He stumbled to a neighbour's front door at about 6.39pm and asked them to call an ambulance, but died just over an hour later despite treatment from paramedics. Detectives have arrested a man in his 30s on suspicion of murder and he was held in hospital overnight with minor injuries, Scotland Yard said.

Reverend Dave Bookless, the vicar of St Mary's church, opposite the scene, said an ambulance was initially able to drive Mr Isichei away, but stopped at a nearby park.

"The ambulance ended up stopping just down the road," he said.

"They were working on him there and trying to resuscitate him but sadly I think the injuries were too severe. It's come as a huge shock. A lot of people are saying this is not the kind of area this happens.

"Although we're kind of in the middle of urban, multicultural London, there's quite a village feeling here.

"It happened in broad daylight in a residential street. People are really quite shocked." 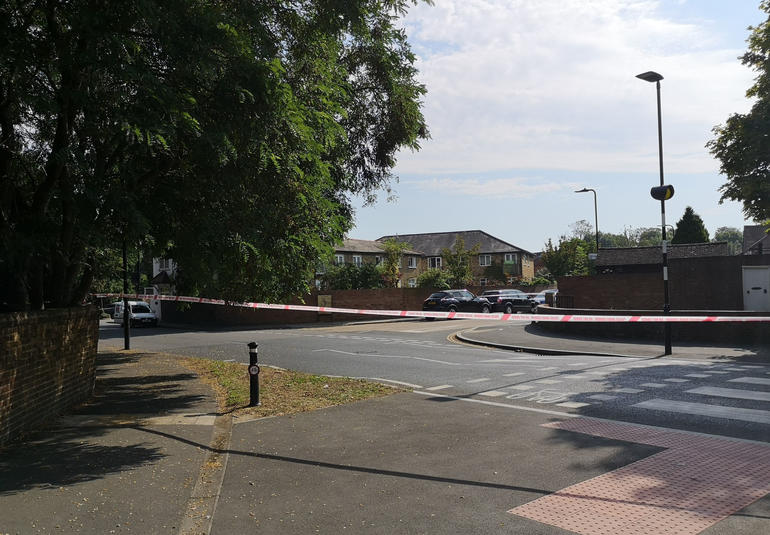 Police tape near the scene in Southall where London's latest murder victim begged to see his wife after he was stabbed when leaving a pub in a leafy suburb.

Neighbour Raj Grover, 41, said his son Kevneet, 15, answered the door after Mr Isichei knocked and begged for an ambulance while calling out for his wife.

"I realised it was somebody who had been injured," said Kevneet, whose 11-year-old sister also saw the injuries.

"He straight away started saying 'call an ambulance'. I said, 'OK, what's happened?' because I didn't recognise him, I got scared.

"He said 'call an ambulance' and then he collapsed. I called my dad.

"The ambulance let us down. When we called, they started asking so many questions. So many people were calling the ambulance, the police.

"The ambulance were asking so many questions, they took quite a few minutes, but then his face started to go white and his lips as well."

Mr Grover said after they arrived the paramedics also asked Mr Isichei to stand up and get onto a stretcher despite his wounds.

London Ambulance Service said it arrived within six minutes and will investigate claims about how the situation was handled. 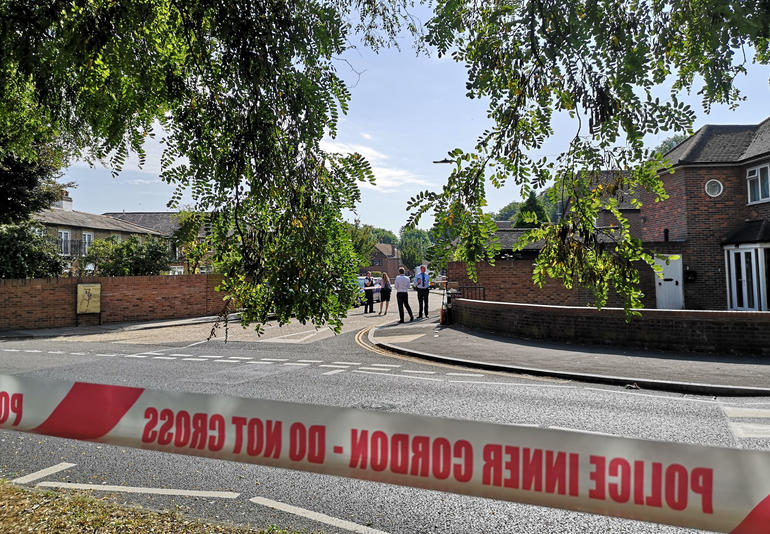 It is understood the attack was not linked to anything inside the pub and Mr Isichei had left "peacefully".

A friend said: "He just walked home as normal and something happened before he got home.

"He would come in about once a week, he played in the band and used to pop in for a chat, he never had more than one pint. He was a lovely fellow, really mild-mannered, a lovely man."

Mr Isichei is the managing director of Broadway Construction, a family business he set up in 1974, according to his Linkedin profile. He has been married for more than 40 years and has also worked as a part-time coach for Wasps Rugby Club, in Coventry, it said.

"Besides work I now play saxophone with an R & B Band and Jazz Ensemble," the profile added.

Mr Grover, director of Galaxy Real Estate, said: "He rang the bell and I went out, my son was there, he was shouting 'dad, come out'.

"I went downstairs and saw he (the victim) was full of blood and then I was running to pick up a towel.

"I put the towel and I was pressing to stop the blood, then my wife came out, we called the ambulance and the police."

Detectives remained at the scene on Sunday afternoon, including forensics teams in specialist uniforms.

The street remained cordoned off, together with nearby roads, until nearly 2pm.

Rev Bookless now plans to open a book of condolence in the church.