A protest took place outside of a Northern Ireland university on Tuesday, which rejected screening a new film about "men and women moving out of homosexual practices and feelings".

Core Issues Trust (CIT) wanted "Voices of the Silenced: Experts, Evidences and Ideology" to be shown in a private invitation-only event at The Queen's University Belfast earlier this month.

The film, which the charity claims is the "banned movie they don't want you to see" has become controversial since Vue Piccadilly cinema scrapped a reservation for the screening of the film.

More than 600 people signed a petition urging the cinema chain to cancel the private showing of the film which tells the stories of 15 people "emerging out of homosexual lifestyles".

A public screening of the film is set to take place this evening at Ballynahinch Baptist Church.

The Northern Irish charity offers therapeutic support to individuals "who wish to move out of homosexual practices, and opposes the determination of aggressive gay lobbies wanting to impose a ban on such support". 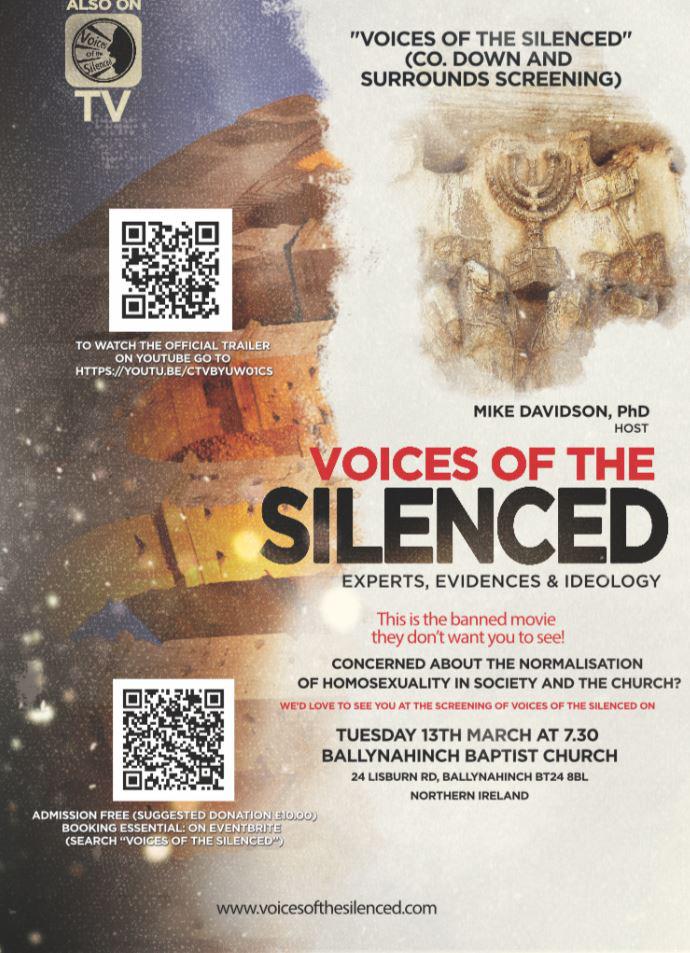 Mike Davidson, CEO of CIT: "Sexual expression may take many different forms and may change over time, as do identities. The film "Voices of the Silenced" shows how and why the 15 individuals introduced in the film have experienced exactly that, regardless of who disagrees with them - they have a right to do so, and it would be respectful to listen to them.

"The cult-like behaviour of those who claim 'once-gay, always-gay', saying that gay -identified and practicing folk never change and may not try to do so - even punishing those who do - is intrusive and bullying."

CIT said it will submit a complaint to the Equality Commission in Northern Ireland against what it calls "viewpoint discrimination" and refusal of services by Queen's University to those representing a valid ex-gay minority group.

A Northern Ireland university has rejected calls for a new film about people who say they left behind homosexual lifestyles to be screened at its premises.

END_OF_DOCUMENT_TOKEN_TO_BE_REPLACED

A new Christian film about people who have abandoned homosexual lifestyles will not screened in central London tonight, after a venue booking was cancelled.

END_OF_DOCUMENT_TOKEN_TO_BE_REPLACED
comments powered by Disqus
You may also like...

With everything going on around the world, I nearly forgot that... END_OF_DOCUMENT_TOKEN_TO_BE_REPLACED

Join Ian Britton on Sunday (29 March) evening at 7 for a special... END_OF_DOCUMENT_TOKEN_TO_BE_REPLACED

Pete Phillips explains why being a Christian does not mean magical... END_OF_DOCUMENT_TOKEN_TO_BE_REPLACED

Join us on Premier Christian this Pentecost Sunday with these... END_OF_DOCUMENT_TOKEN_TO_BE_REPLACED