X
Across the UK > South West > ‘Tell me why you believe’, agnostic asks Christians at New Wine

‘Tell me why you believe’, agnostic asks Christians at New Wine

“There doesn’t seem to be a whole lot of evidence that there is a god in the world”, Ed Atkinson tells me from the sofa of his caravan at the Royal Bath and West Showground in Somerset.

“This is something I think about maybe more than I should”, the former Baptist church elder from Henley-upon-Thames in Oxfordshire explains.

Now openly agnostic, Ed came to the New Wine conference with his wife who stands stirring a simmering pot of Bolognese sauce at a cooker as we chat.

“I love the way that he comes with me in the caravan and supports everything - in our wanting to spend a week in this way”, Maggie, who is a Christian, says.

“There’s no cynicism or ridicule as far as I’m concerned… which I’m thankful for because I know there’s huge turmoil going on within Ed over this whole issue, as he used to be an incredibly strong man man of God...”

Sitting in the New Wine food court with a chalk board which read ‘Hi. I am an agnostic. Please tell me why you currently believe’ was how Ed first caught my attention. 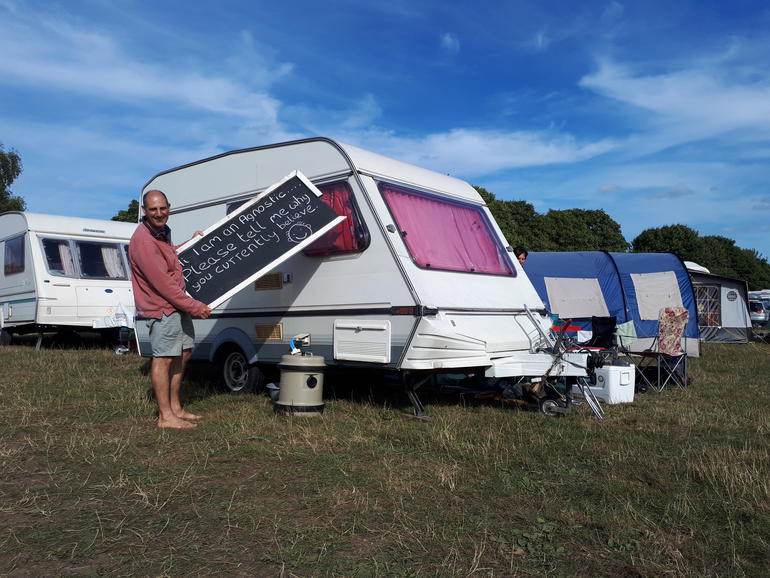 Not many people have taken him up on that offer yet but those two or three who have were “respectful and charming”, he tells me.

Walking back to the caravan, this Cambridge-educated water engineer explains how doubts led him many years ago to abandon the Christianity which played such a significant part in his life.

Ed, who is in his late-50s, says he is simply “after conversation” when I asked him about the sign.

“If I have an agenda”, he replies, “I guess it’s for people to really consider why they believe – and that’s something for all society - agnostics, atheists and people who believe in religions - to really think through; why they believe what they believe and is it well-founded.”

Maggie shares with me her deep hope that Ed will one day return to faith, adding: “I know it’s only a matter of time but that’s all in God’s department.”

She reflects candidly: “I’m feeling far more chilled these days, knowing God’s got his destiny still in the palm of His hand as always; [realising] it’s just not why responsibility anymore… that was a massive freedom.

People who arrive at New Wine with questions about Christianity can attend the Just Looking venue. It was founded by former Baptist minister Mike Fuller and prompted by his desire that atheists and agnostics are not excluded from the conference.

He tells me Just Looking is an “essential part of the mix at New Wine”, adding: “The whole stance of Jesus was to be welcoming to all who would like to encounter more of God.

“There would be something rather disappointing and narrow about people who follow Jesus going away for their own holy huddle and maybe taking no notice of children or family members or friends who are not believing.”

The leader of the New Wine network of churches has told Premier that summer Christian conferences aren't dying out.