How should faith and reason work together?

Before we turn to practical applications of what we have discussed we will pause briefly and take a deep breath. Everything you have read so far is just opinion, informed opinion I would like to think, but I have no authority other than the sense of my function of being one of many voices speaking to the Church today.

Hebraic Church is just a convenient name, it’s not a bid for yet another new denomination. It’s an expression for the One New Man idea that is firmly based on Scripture (Ephesians 2:14-17) but to my mind has yet to be fully realised. 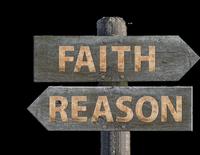 The “One New Man” movement has always concentrated on the restoration of the Hebrew Roots of Christianity, the Jewish element. As you have seen, everything Hebraic speaks of God and ways of getting nearer to Him and understanding His ways. The Hebrew Roots represent an expression of faith. But then I realized that we only have one half of the equation. What about reason? Let me tell you a story …

Despite a reasonably prolific literary output, there was only really one divine ‘eureka’ moment in my writing career. It came around eight years ago, when I was writing my first ‘subversive’ book, How the Church lost the Way. What I failed to do, though, was to interpret it correctly and I really nearly came a cropper as a result. Let me explain …

I was on London Bridge, looking west over the river. What was concerning me at the time were matters of Jew and Gentile, Hebraic and Greek. I can’t remember the exact block I was having, but I asked for a sign and the Lord was gracious enough, just at that moment, to send a small pleasure boat straight down the centre of the river, as I looked over the waters. As the waters broke before the keel, I saw this straight line through the water and knew that the Lord had spoken. Yet I still got it wrong. Rather than seeking wise counsel I interpreted this as the dividing wall of hostility between Jew and Gentile, broken right down the centre. Not veering to one bank or the other, not too Jewish, not too Greek, but straight down the middle. Jew and Gentile in perfect balance, faith and reason, Hebraic and Greek, working together in our One New Man.

Those very words found their way into the first draft of the book, which I duly sent off to a highly esteemed Bible teacher (JDP for those in the know) who immediately demanded that I remove them! I was taken aback. Wasn’t this a word from God, who was he to deny this? I was peeved, but humble enough to concede that he knew far more about such things than I did, so I complied.

It has taken me eight years to realise that he was correct. What I was doing was equating faith with the Hebraic and reason with the Greek. By doing so, I was putting them both on the same level, and thus giving credence to a worldview – the Greek – that is utterly pagan and Godless. Yes, the Greek worldview does stress the need for reason, but it is not Godly reason because the wisdom associated with it is not heavenly.

Such “wisdom” does not come down from heaven but is earthly, unspiritual, demonic. For where you have envy and selfish ambition, there you find disorder and every evil practice. (James 3:15-16)

And so is to be utterly rejected. But this is not to mean that we reject reason,

But the wisdom that comes from heaven is first of all pure; then peace-loving, considerate, submissive, full of mercy and good fruit, impartial and sincere. (James 3:17)

The Hebraic worldview also stresses the need for reason, but that which produces wisdom that has a heavenly source, because of the faith in God that informs it. So faith and reason is not Hebraic vs Greek, it is a matter of getting the balance right between the two in a Hebraic way of thinking.

Eight years ago I over-thought the interpretation of the sign. What I realise now, through the journey that I’ve been on during the intervening years, is that He was really giving me a single word, a single concept, so key to my understanding of Him and His Church that I’m going to say it three times … this is the watchword

Is the Church what we think it is? END_OF_DOCUMENT_TOKEN_TO_BE_REPLACED

Erik Strandness responds to a recent debate between ‘Side A and... END_OF_DOCUMENT_TOKEN_TO_BE_REPLACED

Why we should celebrate our oldies END_OF_DOCUMENT_TOKEN_TO_BE_REPLACED

Global evangelist and founder of Christ for all Nations (CfaN)... END_OF_DOCUMENT_TOKEN_TO_BE_REPLACED

The Archbishop of Canterbury believes churches must "strive for... END_OF_DOCUMENT_TOKEN_TO_BE_REPLACED

Unbelievable? Can faith survive an evolutionary account of humanity and religion? – Andrew Halestrap and Sam Devis
Sam Devis is a former Christian and produces a podcast called... END_OF_DOCUMENT_TOKEN_TO_BE_REPLACED