Which Kingdom do you inhabit?

There is a significant difference between the two Kingdoms. In the Kingdom of the World, your life is lived as in a raging torrent, buffeted on all sides by the winds. Progress is random, seemingly governed by the hands of the Greek deities of luck and fate, but directed overall by society’s implementation of evolutionary forces that ensure that only the strong and ruthless flourish and ‘looking after number one’ is the best way of charting your course through life. Yet the sheer randomness of illness, accident or acts of nature thwart even the mightiest, with no-one guaranteed a truly fulfilled life. 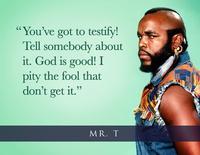 In the Kingdom of God, life can still be a struggle and can still be wrenched away from you ‘before your time’ or ravaged by disease or circumstance, yet the assurance of purpose is there as a constant, even though you may not get the answers you need to make sense of it. The guarantee is of a glorious future, but not necessarily of a trouble-free present.

And this brings me to those who straddle both Worlds, in order to reap the benefits of the Kingdom of God while living by a set of rules of their own making. Welcome to the World of the Christian Celebrity, the celebrities who call themselves Christian.

There’s the “Christian” boxer who has clear problems with women and gay people and casually issues death threats to those who cross him.

There’s the “Christian” mega-star singer who has described herself as ‘bootylicious’ because of her style of dance and dress (or lack of it).

There’s the “Christian” politician (if fact take your pick here) who cherry-picks policies that make them appealing to the populace but are at odds with plain Biblical teaching.

There are so many examples, one could write a book about this phenomenon. It makes a joke out of our three principles. Are they honouring God when they are more intent on feeding their own egos? Are they reflecting Jesus with visibly compromised lifestyles? Are they truly engaging with the Holy Spirit or are there other forces controlling them? These people do so much damage to the Body of Christ. They give us all a bad reputation but, more importantly, give God a bad reputation … and they are truly playing with fire here!

I’m sure there are good ‘uns out there. It’s a pity we rarely hear about them, but then that’s probably an indictment of the media industry more intent in propagating bad news and behaviour to cater for the lowest and basest of our appetites. No one ever got rich reporting on Good News, that’s the World we live in!

Then there are the Christian Celebrities, whom we have placed on a pedestal and “worshipped” as surrogates of the real thing. Why does the Christian world seek to copy the Kingdom of the World? It rarely does a good job of it. Look at the dire state of Christian TV and its fundraising methods and you’ll see what I mean. What does it say about followers of the God who Created the Universe to see them beg for funding in public, acting like snake-oil salesmen and living like princes! In fact this is not so much copying the World, this is the trashing of God’s Kingdom!

We have become a sub-culture, a lobbying group among many, a special interest group among many, a religion/lifestyle among many! Perhaps this is better than when Christendom was ruling the roost and breaking God’s heart through the propagation of such a corruption of the Gospel of Christ. Christians have always worked better from the margins, following the lead from the very first Church that we read about in the Acts of the Apostles. This should satisfy us rather than trying to build huge unwieldly enterprises that are nothing more than facsimiles of the World.

All of this should be screaming of what I wrote earlier. We are not of this World, so we should not be copying it, because we always do a lousy job of it! We are called-out individuals, connected spiritually and endowed with great power from above in order to do His work in calling others out. We are not primarily called to be organisations and structures with marketing budgets and five-year plans. Yes, some ministries do fantastic work and are rewarded by the Lord by grace and favour, rather than equitable salaries and pension plans. Let us identify and support those that honour God, reflect Jesus and engage the Holy Spirit rather than those that honour the ‘bottom line’, reflect the fight for survival and engage management techniques in order to achieve the other two. Let’s learn to follow the Spirit … not the money!

Our call in the world should be one of pro-action, not reaction. What do I mean by this? Our Christian sub-culture is good in what it calls relevance and engagement. Dan Brown writes the Da Vinci Code and twenty Christian writers write rebuttals of it. Something happens in politics and umpteen Christian bloggers, writers and columnists tells us “What Jesus would do …” according to what their particular Jesus, governed by their flavour of Christianity, tells them. We seem to have the answer to all the foibles and strains of living in the 21st Century and are quite willing to add our voice to the hundreds of other voices responding to the same triggers according to their worldview.

The problem is the one already identified. There are as many flavours of Christian opinion as there are flavours of political opinion. There is no one authoritative voice. No wonder no-one is listening to us! Just consider the gay issue for commentary on this situation.

Fear … of loss of credibility and acceptance. That’s what drives many Christian commentators, particularly those of a liberal ‘persuasion’ who, when push turns to shove, often offer views on social matters closer to their secular counterparts than many of their Christian brothers and sisters. How on earth can we be consistent in our witness in the world if we offer such a range of opinions? I say this because I am tarred with the same brush, I can equally be faulted by my liberal Christian brothers and sisters for not agreeing with them.

As health systems come under pressure our culture‘s value of... END_OF_DOCUMENT_TOKEN_TO_BE_REPLACED

Why we should celebrate our oldies END_OF_DOCUMENT_TOKEN_TO_BE_REPLACED

It’s the most natural question in the world: If God is good and... END_OF_DOCUMENT_TOKEN_TO_BE_REPLACED

Global evangelist and founder of Christ for all Nations (CfaN)... END_OF_DOCUMENT_TOKEN_TO_BE_REPLACED

Tim Keller has claimed it is "harder" to be an evangelical Christian... END_OF_DOCUMENT_TOKEN_TO_BE_REPLACED

Brothers from Lahore have been sentenced to death after posting... END_OF_DOCUMENT_TOKEN_TO_BE_REPLACED

A woman, aged in her 30s, is critically ill after being found... END_OF_DOCUMENT_TOKEN_TO_BE_REPLACED