Do we honour God?

Let me tell you a story …

I once read a book called “Dice Man” where the main character made all major decisions based on the throw of a dice. Others have used astrology charts, tarot cards and other occult paraphernalia. More considered approaches include the self-explaining What Would Jesus Do (WWJD)? Movement, based on the 19th Century novel, In His Steps by Charles Sheldon. Well meaning but sadly perhaps a tad simplistic in our ‘sophisticated’ age. 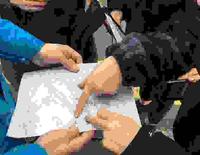 The reason I bring this up is the 2016 EU Referendum. For most people it was the biggest political decision they had ever been asked to make. Its importance was drummed into them by the constant onslaught from the press, TV and the web, but also from family members and friends. It was seemingly a matter of life and death and families and friends were, perhaps for the first time, at odds with each other as each reacted differently to the relentless commentary, opinion, hype, propaganda and rhetoric that bombarded us. Yet, despite all this wealth of information, there was not always the wisdom available with which actually to make an informed decision. Raw emotions held sway, fed by editors and politicians greedy for our ears and eyes. The biggest emotional blast, brandished by both sides of the argument, was that of fear, warning us of ‘dire consequences’ if we allowed ‘the other lot’ to win the day. A parallel situation befell our brothers and sisters in the USA in the recent presidential campaign, the fiercest of its kind in American history.

How were Christians meant to respond to this? How were they to make an informed decision when there didn’t seem to be a unified Biblical voice from the main denominations? There were other voices with strong Biblical arguments, but often tinged by doctrinal and eschatological views. It was all a matter of who shouted louder, or who were the most passionate. I heard good arguments from both sides, yet I also heard bad, divisive arguments from both sides. There were good people on both sides. Equally there were very questionable people on both sides. Fed up with this I originally decided to abstain and unwisely blogged about this (non) decision, resulting in a bit of a scolding from a few quarters!

Then came Wednesday night, the early hours of Referendum day. That night we Londoners, within a few miles from the seat of power in our country, experienced perhaps the angriest storm of our lifetimes. It was relentless, thunder and lightning right through the night. In my eyes, cowering beneath the duvet, God had spoken and reminded me that He was very much involved in the affairs of state. Referendum day itself was grey, gloomy and lifeless. The day after was a beautiful sunny day and, as I wandered along London’s South Bank, the only anger and gloominess (as well as confusion and despair) was in the faces of most Londoners.

Where am I going with this? I would love to pontificate on the subject of the God of the storms, floods and earthquakes or of the theology of Brexit but, instead, we need to concentrate on the very hazy and neglected area of how we Christians make our decisions.

After much thought, prayer and a long walk along the Bournemouth promenade, I have concluded that there are three over-riding principles that should inform godly decision making, each driven by a key Scripture from Jesus’ long discourse to the disciples in the Book of John and also informed by some key principles as laid out in my book, Hebraic Church, namely the primacy of God and His Word. As every decision has to be guided by the Truth, it is just a matter of looking at the source of The Truth, as defined by Scripture.

Jesus is The Truth. God is The Truth. This has to be the centre of everything, as we wrench our consciousness away from the mutterings of man. We must always be aware where we are in relation to Him and act accordingly. The following Scripture should remind us of that fact:

See, I have refined you, though not as silver; I have tested you in the furnace of affliction.  For my own sake, for my own sake, I do this. How can I let myself be defamed? I will not yield my glory to another. (Isaiah 48:10-12)

And here we return to our arguments at the head of this Chapter. The all-importance of God’s Name and reputation.

Our decisions must be for His Name’s sake and for His Glory, not for the glory of man and must certainly not act against His glory, such as the times when Ancient Israel rebelled against him in their spiritual adultery and defamed His Name.

It is a matter of honour and respect. Do we respect Him? Do we honour Him?

So, here is the first principle: In all we are doing … are we respecting His Name … are we honouring God?

Why did the Church start celebrating the Sabbath on a Sunday... END_OF_DOCUMENT_TOKEN_TO_BE_REPLACED

What should Gentiles do about the Sabbath?  END_OF_DOCUMENT_TOKEN_TO_BE_REPLACED

MPs are expected to vote today in favour of a motion that would... END_OF_DOCUMENT_TOKEN_TO_BE_REPLACED