How heresies are born

We start at the Creation story. To Plato, the Universe came into being through the work of the Demiurge, not quite God as we know Him, but a lesser god. Dualism implies that anything of the physical world is inferior to anything of the spiritual world. So this Demiurge, responsible for the Creation of the physical Universe, just has to be an inferior god, from Plato’s point of view. Marcion, a heretic from the First Century, took this further and divided the whole Bible up according to dualism. For him the God (Demiurge), the people (the Jews) and the scripture of the Old Testament are physical and therefore inferior, whereas the God (Jesus), the people (Christians) and the scripture of the New Testament are spiritual and therefore superior. This notion fed into the “Christian” anti-Semitism, masquerading as ‘replacement theology’ or supercessionism that still reigns in some parts of the Church and is nothing more than pandering to a pagan alien mindset, as well as hatred that may lurk in the deepest part of the soul.

When Plato says that the soul is good and the body is bad, he is declaring a basic principle that has many guises. In religious terms, he is saying that the physical world, the one in which we live, is bad (or evil) and the spiritual world (heaven and such places) is good, and therefore worth striving for. So, material world is bad … spiritual world is good. This theme is going to pop up again and again in Christian thought and practice, as you begin to realise how deep this idea has sunk into our collective minds. 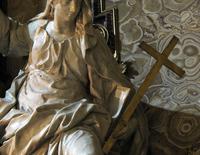 Because of this, many of the gentile Church Fathers were uncomfortable whenever, in the Bible, God (a spiritual being) mixes it with us on a human level (the material world), when He interacts with man personally, or shows human characteristics or emotions. When they considered such God-man interactions they would look beyond any literal interpretations of the verse for deeper meanings, allegories, often looking for deeper “spiritual” meanings behind Bible verses that the author (God) meant just to be taken literally.

A favourite theme would be to re-interpret the Old Testament in the light of the New Testament, using techniques from Greek philosophy, married with insights from early Christian tradition and other writings. The driving principle was that the Bible contained three levels of meaning, corresponding to the body, soul and spirit. You can see the influence of Plato here, particularly when they consider that the “body” level of meaning, the literal meaning of the text, is for the more simple minded whereas the “soul” and more particularly the “spirit” levels of meaning are for the more enlightened readers. The scene has now been firmly established that, because of the demands of the Platonic world view in preferring the spiritual over the material, spiritual meanings were sought, even in Bible passages that were so obviously meant to be taken literally. A free-for-all was now created, allowing Christian teachers right up to the current day to be able to bend and coax God’s Word to say whatever they want it to say!

It may have been just one tiny idea, but it produced some major effects. With Greek philosophy so embedded in Christian thought it is now possible to see how heresies begin. We have already seen Marcionism, from the heresy of Marcion in dividing up the Old and New testament in opposition to each other. Then there was Jesus himself. Another heresy called Docetism declared that God was a spiritual being and couldn’t take a physical form. So Jesus couldn’t possibly have had a real body, he just seemed to have one. He was therefore an illusion, as was the crucifixion! You can see how this dualist approach would have confused them. We know Jesus as fully God and fully man, but to these people, educated to believe that only “spiritual” is good, how can Jesus be expressed also in the “physical”? They just couldn’t get their heads around it!

In fact heresies abounded in the first few centuries of the Christian era. Here are a few more. Apollinarianism stated that Jesus had a human body, a lower soul and a divine mind. Eutychianism suggested that Jesus’ human nature was overcome by the divine nature. Montanism exercised a sort of extreme Pentecostalism. Monarchianism insisted that God was a single person. Nestorianism argued that Christ existed as two persons.

Sabellianism declared that everything was how the believer perceived it to be, whatever that was meant to mean! They were either named after the person who thought them up or after the Greek word for the principal idea.

It’s the most natural question in the world: If God is good and... END_OF_DOCUMENT_TOKEN_TO_BE_REPLACED

Erik Strandness responds to a recent debate between ‘Side A and... END_OF_DOCUMENT_TOKEN_TO_BE_REPLACED

Global evangelist and founder of Christ for all Nations (CfaN)... END_OF_DOCUMENT_TOKEN_TO_BE_REPLACED

Tim Keller has claimed it is "harder" to be an evangelical Christian... END_OF_DOCUMENT_TOKEN_TO_BE_REPLACED

Brothers from Lahore have been sentenced to death after posting... END_OF_DOCUMENT_TOKEN_TO_BE_REPLACED

A woman, aged in her 30s, is critically ill after being found... END_OF_DOCUMENT_TOKEN_TO_BE_REPLACED