Now for a touch of awkwardness, when we look at the mainstream Western Church and particularly examine our witness to the World. The first thing to note is that there is still separation between the visible “Church” and the actual Church, of called out individual Christians. The world tolerates the former but is deeply suspicious of the latter. 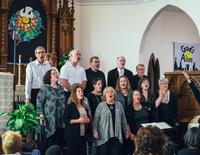 When I look at the mainstream UK Church, the primary goal seems to be maintaining a relevance and a voice in society. The means that they seem to be using to accomplish this is compromise and not speaking out of turn. The thinking seems to be that it’s better to have some sort of religious representations in society even if they are not actually representing God’s “narrow”, “exclusive” and “uncompromised eternal agenda”, but are rather working alongside the World’s “progressive”, “broad”, “tolerant” and “inclusive” agenda. The sign of success is that the Church is tolerated as something that is doing its best but is mostly harmless. You may judge whether God considers this a “success”.

Here’s some data to back this up. A few months ago I decided to look at a seven day period in the life of Justin Welby, the Archbishop of Canterbury. So I analysed his tweets. There were eight of them; there was a statement on human sexuality, a call to end fighting in Sudan, a statement on the EU referendum (he was a ‘remainer’), a statement about living in a holy community, a message for Muslims to have a happy Eid Mubarak, an appeal for funds, a statement on child poverty and a soppy statement about peace and love. Where were the calls for repentance, to return to God? Where were the thus says the Lords? Remember, here’s the man considered Number One in our State Church. If he doesn’t have a hot-line to the Almighty, then who does? This is not a condemnation of the man, but of the office, of how the State Church has become too embroiled in the ways of the World to be a prophetic voice to our land.

When I look at us Christians and the way we are taught to do our evangelism, I was first drawn to a simplification, perhaps even a caricature of the process. And it spoke volumes to me. It seems that the primary goal of the Christianity that we are propagating is eternal life for the individual. The means that this is achieved is a “one-time” recital of the “sinner’s prayer”, such as the one here:

Dear Lord Jesus, I know that I am a sinner, and I ask for Your forgiveness. I believe You died for my sins and rose from the dead. I turn from my sins and invite You to come into my heart and life. I want to trust and follow You as my Lord and Saviour. In Your Name. Amen

This could be misunderstood as a “magic” formula or incantation, as if the process of repeating these words is sufficient to blaze a trail into the halls of eternal life. If it is, then this is Christianity-lite, commitment-free, Hope-zero; seeds of the Great Omission (rather than the Great Commission), something has been removed, a “conversion” without commitment, a transaction without consequence.

Of course, the heart may have already been primed for this life-changing prayer. This may be a culmination of Holy Spirit nudges over a period of time, with the deal finally sealed and the heavenly choir truly activated. Or … here is a telling quote by Paul Washer (truthsource.net):

"In modern day evangelism, this precious doctrine [of regeneration] has been reduced to nothing more than a human decision to raise one's hand, walk an aisle, or pray a 'sinner's prayer.' As a result, the majority of Americans believe that they've been 'born again' even though their thoughts, words, and deeds are a continual contradiction to the nature and will of God."

Does this mean that many in the “Church” may not even be saved? What a horrible thought. This is serious business and we need to remind ourselves what ought to be the focus of our evangelism.

Nothing less than to produce Christians of the ilk of the Acts 2 church, where the primary goal or objective is to reflect Jesus. The means by which this is accomplished is engagement with the Holy Spirit and the sign that this has happened is that our lives become God-centred, that we honour God above all. Our three basic principles in action!

Why did the Church start celebrating the Sabbath on a Sunday... END_OF_DOCUMENT_TOKEN_TO_BE_REPLACED

Who speaks for us? END_OF_DOCUMENT_TOKEN_TO_BE_REPLACED

Why we should celebrate our oldies END_OF_DOCUMENT_TOKEN_TO_BE_REPLACED

How does the church all fit together? END_OF_DOCUMENT_TOKEN_TO_BE_REPLACED

A Muslim father has been convicted of racially abusing staff... END_OF_DOCUMENT_TOKEN_TO_BE_REPLACED

Christians in Russia are now banned from discussing their faith... END_OF_DOCUMENT_TOKEN_TO_BE_REPLACED