X
Blogs > Yeshua Explored > For the Sake of My Name!

For the Sake of My Name!

Why is God is the most misunderstood Person in the Universe?

The Great British Bake-off is, curiously, the most popular TV show at the time of writing. The central idea revolves around the act of baking, a process remarkable in its simplicity. In fact, to bake a standard loaf, all you need are four ingredients; flour, yeast, salt and water. It’s as simple as that. The best things in life are the simple things. It is also thus for the most important thing in life, our relationship with our Creator. He has made it easy for us, He gives us three compatible and interrelated ways of connecting to Him. He has given us His Son, Jesus, to provide the Way for us and show us how to live it; and the Holy Spirit to live within us to guide us in this Way. He has also given us Himself.

Many claim to hear Him, see Him, feel Him, be guided by Him yet most of them are duped by imposters and substitutes. It is the deception of our age and it has left Him with a bad press, with many questionable and horrific acts committed in His Name. Even by ‘so-called’ Christians. Even by sincere Christians. Let us cut right to the chase.

"Therefore say to the Israelites, 'This is what the Sovereign LORD says: It is not for your sake, people of Israel, that I am going to do these things, but for the sake of my holy name, which you have profaned among the nations where you have gone”. (Ezekiel 36:22) 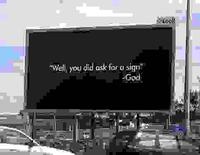 God’s Name is very important to Him. We see a watered-down version of it in society where many clamour for undeserved ‘respect’ and are willing to commit acts of violence to obtain it. Let’s make it clear from the outset that God is the only Person in our world who deserves respect, the only Person Whose Name is not to be profaned among the nations. Any act that is performed in His Name, whether by Christians or others, is going to be reckoned, judged and rewarded accordingly by Him. It is an aspect of His character that is generally ignored because of its implications. But sweeping it under the carpet does not lessen its power.

In the Ezekiel passage above God speaks of the good things He is going to do for His people, Israel. It’s not that they deserved it - they didn’t because they had profaned His Name; it was because of His Name that He was going to do it. To understand these things we need to understand Him better. Here are a few points from the pages of my book God’s Blueprint, my defence of the truth and beauty of the Old Testament.

God does all He can to grab our attention. We are perfectly capable of reading God’s Word and missing His Voice. It may be that we’re in a hurry to “read today’s portion”, because we’re behind schedule or have a load of other stuff to do afterwards. Or perhaps we just don’t have our spiritual antenna tuned, either through a crisis of faith, a general despondency or through a perceived over-familiarity with the text.

God uses the most unexpected people to carry out His plans. He chooses whom He chooses. That was true of the Nation of Israel, that small, noisy, contrary and stiff-necked people. And it was also true of those individuals whom He selected to carry out His plans. Now there’s a case for declaring just about every character that God chose from His own people as flawed. God really is in charge and He will continue to use others in your life (as well as you in theirs) to fulfil His purposes in the long-term. Our task is to discern when this is happening and not to resist it.

God does things in His own way and to His own schedule. Jonah felt that God was unreasonable to want to save the evil city of Nineveh. So he ran away and became a fish dinner. Yet even in this act of defiance, God was able to use him to reveal Himself to his shipmates and save their souls. The people of Judah felt that it wasn’t time to repair the Temple, but Haggai reminded them otherwise. All Job knew was that things were bad for him and getting worse. Yet his immediate reaction is that God knows what He’s doing.

God prefers it if we don’t mess Him around. If prizes could be given out for moaning, the Children of Israel in the desert would have hit the jackpot. Despite the miracles of deliverance they witnessed, they still didn’t always have sufficient trust that God would supply their physical needs. “Lord”, cried Moses, “for how much longer am I to carry these people?” Anyway they demand meat (despite their behaviour falling to a new low), so He gave them meat, lots of it … followed by a plague. King Solomon, as a result of his dalliances with pagan women and their gods, died in middle age, a confused and bitter man. But, if you think these early Kings were bad, they were not a patch on the later ones, particularly the Kings of Israel.

Who speaks for us? END_OF_DOCUMENT_TOKEN_TO_BE_REPLACED

Why did the Church start celebrating the Sabbath on a Sunday... END_OF_DOCUMENT_TOKEN_TO_BE_REPLACED

Are our churches true communities?  END_OF_DOCUMENT_TOKEN_TO_BE_REPLACED

MPs are expected to vote today in favour of a motion that would... END_OF_DOCUMENT_TOKEN_TO_BE_REPLACED