What are the modern alternatives to God?

When it boils down to it, there are only two ways of explaining human existence and the world in which we live. There is the Christian view that sees God as separate from His creation. And there’s every other view, encompassing religions, philosophies, lifestyles and whatever. It really is as simple as that and it shows the utter uniqueness of the Judeo-Christian viewpoint.

Ever since Adam and Eve fell and mankind turned to its own wisdom to explain things, we have become more and more the centre of our own universes, with God, or an “idea of the divine” living in the same universe, often vaguely intertwined. Out of this comes variations of man-centred religion and philosophy and, sad to say, many Christian expressions are swimming in the same waters and don’t realise how close they are to drowning.

Let’s start by considering the New Age. Certainly a buzzword in the 1980s when I was a new Christian. Well, the New Age never really went away, it has just become so mainstream that even Christians feel free to sup from its brew.

The New Age? When I was a young Christian there was a plethora of books warning us against this synthesis of religions and dubious spirituality, featuring techniques plundered from Buddhism and Hinduism and even darker expressions. We were warned against Transcendental Meditation, yoga, martial arts, acupuncture, homeopathic medicine and their likes. Now, not a murmur, because they are firmly embedded and have mostly been brought into the structure of how we now practice our Christianity.

The dangers have not gone away, just been ignored. There is a subtle, invisible onslaught on our Christian faith, these days. Unlike the obvious threats of jihadist Islam or secular humanism it passes ‘under the radar’. It goes by the name of neo-paganism, though it’s just really the New Age part two, masquerading as something that sounds a lot grander. 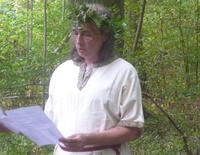 Let us consider this neo-paganism, this silent corrupter. How else does it manifest itself? Paganism itself, of course, has its origin in the earliest of Bible times. And it was a decidedly bad thing, a stealer, a usurper, channelling worship away from the true God and towards demons. A gruesome gallery of idols featured, all familiar, from Astarte to Moloch, Baal to Asherah. Each had unique properties and features but all were unwelcome distractions for the Children of Israel and the cause of much that went wrong for God’s people.

Here were the penalties for succumbing to their “charms”:

“This is what the Lord Almighty, the God of Israel, says: You saw the great disaster I brought on Jerusalem and on all the towns of Judah. Today they lie deserted and in ruins because of the evil they have done. They aroused my anger by burning incense to and worshiping other gods that neither they nor you nor your ancestors ever knew. Again and again I sent my servants the prophets, who said, ‘Do not do this detestable thing that I hate!’ But they did not listen or pay attention; they did not turn from their wickedness or stop burning incense to other gods. Therefore, my fierce anger was poured out; it raged against the towns of Judah and the streets of Jerusalem and made them the desolate ruins they are today. (Jeremiah 44:2-6)

God still hates detestable things, so, if we are still worshipping them, surely that’s going to create problems in our relationship with Him? Yes, we are in different times, we are people “under grace”, yet that’s not going to protect us in the long run if we are persistent in our sins. So, what is the situation these days?

We will find out next week …

Why did the Church stop celebrating the Sabbath on a Saturda... END_OF_DOCUMENT_TOKEN_TO_BE_REPLACED

Which church does God prefer? END_OF_DOCUMENT_TOKEN_TO_BE_REPLACED

Why we should celebrate our oldies END_OF_DOCUMENT_TOKEN_TO_BE_REPLACED

How does the church all fit together? END_OF_DOCUMENT_TOKEN_TO_BE_REPLACED

The Northern Ireland Assembly has voted in favour of what's described... END_OF_DOCUMENT_TOKEN_TO_BE_REPLACED

Robert Joyce from a small town in central Arkansas was challenged... END_OF_DOCUMENT_TOKEN_TO_BE_REPLACED

The former Archbishop of Canterbury, Lord Carey, has said the... END_OF_DOCUMENT_TOKEN_TO_BE_REPLACED

A truck driven into a busy Christmas market by an iconic church... END_OF_DOCUMENT_TOKEN_TO_BE_REPLACED