Is the Church firing on all cylinders?

Invisible Church, total Church, the purpose-driven Church, ancient ways for modern Churches, the Jesus model, Hebraic Church. What is the best Church model for those living in the western world in the 21st Century? Is there a formula that works? Is there a perfect Church out there? If there was, it would surely have been dissected, reconstructed and franchised to death, all actions that would surely bring destruction to the very thing that they wish to emulate. Is it worth bothering, is this a fruitless search? Hasn’t history shown us that mankind is too flawed? Perhaps that’s the point, God’s planting of a blueprint in our collective hearts that can only be fulfilled by Christ’s eventual reign as King?

What is the very best we can hope to achieve? Surely every time an individual or group of Christians has a bright idea and a perceived divine prompting to try something new, the intention is to ‘finally get it right’. Who is to say they have or haven’t? Well, two things really can provide judge and jury; immediate fruits and long-term effectiveness. Both are necessary as a sign of authenticity.

If it ain’t broke, don’t fix it! That’s a simple rule to live by, isn’t it? Well, not quite, as some things may be more broken than we realise, or, at least, are not exactly firing on all cylinders, a persistent feature of the old jalopy that I drive. In that case, the Church, in local vernacular, is well clogged up, innit?

This now cunningly allows me to drag one of my well-worn metaphors into the mix (actually first coined by David Pawson). What the Church needs is a thorough de-Greece-ing! To those who haven’t read my earlier books, this speaks of a removal of the effects of Greek philosophy. The “Greece” hasn’t reached all parts of the Church and, in some places, the de-Greece-ing has already started. In yet others, the grime and the filth are from other places, notably the human heart, aided and abetted by ‘the enemy of our souls’. The whole sorry situation was succinctly described by James:

Such "wisdom" does not come down from heaven but is earthly, unspiritual, of the devil. For where you have envy and selfish ambition, there you find disorder and every evil practice. (James 3:15-16) 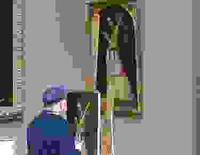 At a recent conference a trusted source was given a vision. It was of an old painting that had been covered by layers of filth and grime, but the focus was on the restoration process, scraping away to get back to the original. The point of this book is to look at the restoration process, to try and work away at the filth, the grime … as well as the “Greece”. It’s nothing new and is far simpler than you may think. It’s not a new strategy, programme or formula extracted from the psycho-babble of the business world. You’re not going to have to shell out thousands of pounds for instructive seminars endorsed by Christian “celebrities”. In fact it’s free. We’re talking of tap water rather than Evian or L’Eau de Ripoff. We are simply bottling up the atmosphere generated by the Church of the first disciples and those who shared their mindset and presenting it to the Church of today in a relevant manner.

There is a problem though. I highlighted it in most of my recent books, most particularly in the last one, Hebraic Church. It’s like trying to re-wire a house that still functions on a pre-war system. Sometimes the best thing is to rip the whole thing out and start again, because there has been a change in the intervening years. It is the author’s contention that there has been a major change in us, in the way that we think. Because of this, it is very difficult to completely restore us to the way things were. The best we can do in some cases is to be aware of the differences and suggest work-arounds. In other cases perhaps, if we try hard enough … we can restore the Old Master to its original beautiful condition.

What should Gentiles do about the Sabbath?  END_OF_DOCUMENT_TOKEN_TO_BE_REPLACED

How can Jews and Gentiles learn to play nicely together in the... END_OF_DOCUMENT_TOKEN_TO_BE_REPLACED

Are our churches true communities?  END_OF_DOCUMENT_TOKEN_TO_BE_REPLACED

MPs are expected to vote today in favour of a motion that would... END_OF_DOCUMENT_TOKEN_TO_BE_REPLACED