We are more pagan than we realise! 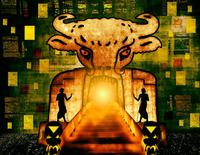 Moloch was a “god” that demanded child sacrifice (2 Kings 23:10). Could there be anything worse than that? Do I really need to quote current abortion statistics and then ask how many of these beautiful potentials are sacrificed because they are “inconvenient”?

Asherah was associated with fertility and sexuality. Part of ancient worship included activities with male prostitutes, a practice that, during the darkest days, even flourished in the Jerusalem temple (2 Kings 23:7). All of this was demanded by the goddess. One wonders to what extent our days are a reflection of those times?

Baal was perhaps the greatest challenge to the True God. He was the chief “god” of the Canaanites (Judges 3:7, 1 Kings 16:31-33), the name itself meaning “Lord”. Whenever we see a major usurper demanding our worship, we are succumbing to the same spirit.

Neo-paganism is basically taking these detestable practices from the Old Testament and dressing them up in trendy garb to give them ‘street-cred’ and ‘coolness’. Now we can all be Tibetan Monks, or even druids or witches without the awful inconvenience of death by drowning, burning or stoning.

It has entered our culture simply because of our need to worship. For the centuries between the Renaissance, the Enlightenment and the “Age of Reason”, we were satisfied with worshipping ourselves and our great cleverness, giving rise to the Secular Humanism that has been the chief driver of our current Western culture. But now, as evidenced by the rise of neo-paganism, there’s a yearning for worship of an “Other”, of something that lies beyond, or, should I say, lurks beyond … like a roaring lion? (1 Peter 5:8)

There is an overt form of it that is practised by those who actually call themselves pagans and worship nature (creation) in all of its forms. Paganism is said to be the fastest growing religion in the UK, encompassing druidism, witchcraft, tree-huggers, shamanism and also followers of the old Norse “gods”. There are said to be up to 200,000 pagans in the UK.

It’s the covert side of it that we need to be most wary of, the spiritual undercurrents that sway the undiscerning mind and drags it into bad places. For instance, is yoga harmless? How many church halls host yoga classes or martial arts classes or “Christian” mindfulness sessions? Does this make it OK, just because the local vicar has been swayed by these unseen forces and condoned these practices (usually for financial reasons). I will have more to say about these two practices in the next few articles.

So what should we do? First let’s gird up our loins with Scripture, our anchor when the madness of our World encroaches:

The Spirit clearly says that in later times some will abandon the faith and follow deceiving spirits and things taught by demons.Such teachings come through hypocritical liars, whose consciences have been seared as with a hot iron. (1 Timothy 4:1-2)

Some may argue that, as long as we are vigilant and alert, it is possible to indulge in some of these practices without being corrupted by them. A warning should come from the fundamental principal of one of these practices itself, homeopathy. In this technique, a medicine is administered after the core ingredients are diluted so many times that there surely can’t be more than a small clutch of molecules actually left in the mix when it is administered. This, apparently is not the point. The point is not the chemicals or molecules themselves, but the spiritual forces attached to them. And so it is with all of these “New Age” practices, one must look at origins and purposes and realise that there is always more going on than meets the eye. Don’t let a pagan Trojan horse into your spirit. Be warned!

That was the challenge levelled at historian Tom Holland on The... END_OF_DOCUMENT_TOKEN_TO_BE_REPLACED

Join us on Premier Christian this Pentecost Sunday with these... END_OF_DOCUMENT_TOKEN_TO_BE_REPLACED

Why we should celebrate our oldies END_OF_DOCUMENT_TOKEN_TO_BE_REPLACED

Global evangelist and founder of Christ for all Nations (CfaN)... END_OF_DOCUMENT_TOKEN_TO_BE_REPLACED

Tim Keller has claimed it is "harder" to be an evangelical Christian... END_OF_DOCUMENT_TOKEN_TO_BE_REPLACED

Brothers from Lahore have been sentenced to death after posting... END_OF_DOCUMENT_TOKEN_TO_BE_REPLACED

A woman, aged in her 30s, is critically ill after being found... END_OF_DOCUMENT_TOKEN_TO_BE_REPLACED