My cosy little world was severely disrupted yesterday. No, it wasn’t the three hour drive while feeling rather weary. Neither was it the three aged parents we were looking after on a short break to Geriatria-by-the-sea. Neither was it the sudden downfall while I was ferrying luggage to chalets, while dealing with frantic room-swapping. No, it was this - the sudden removal of what has become for me, and possibly you too, an ever-present and indispensable personal hub, connecting me to the world through sight and sound. My iPhone had died on me. Absolute disaster, I felt bereaved. There is a Hebrew word for how I was feeling. The word is ra, and the mildest form of it is when chaos reigns and nothing seems right or makes sense. The stronger form of the word is applicable to a society descending into division and anarchy, where freedom is restricted and order and justice are in short supply. I, of course, just had a brief taster of the milder form, quite trivial in the grand scheme of things, but enough to realise how fine the margins are between order and chaos, in the world we live in. The stronger form acts as a valid but frightening description of our current society. More on this a little later in these articles. 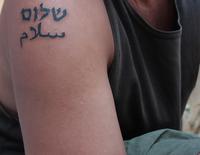 There is a word that is the opposite of ra. That word is shalom. The go-to word for Christians trying to demonstrate their Hebrew ‘cred’. The ubiquitous word for comings (“hello”) and goings (“goodbye”) for Israelis. The Hebrew word that is perhaps the most misunderstood in its fullest sense. At its most general sense it takes the meaning of peace, which is how the Hebrew word is translated in the vast majority of instances in the Old Testament. In the New Testament, the Greek equivalent word is eirene, also translated as “peace” in virtually every instance. The online Catholic dictionary defines it also as “peace” and so does, interestingly, the Jewish Encyclopaedia. Add to that the Urban Dictionary and more or less every dictionary out there. So it seems an open and shut case. Or is it … ?

Digging deeper into the Hebrew mind, we find that shalom (and eirene) begins to open up and reveal its secrets. We find that a better translation of the word is completeness, wholeness, well-being and restoration. The various Hebrew concordances (Strongs, NAS, Brown-Driver-Briggs) all convey the primary understanding of completeness, although the translators usually prefer the more general term of peace. Perhaps the latter has more of a poetic feel to it, but it is always important to consider the context in which the word is used. There are some crucial passages that we will be investigating, when the word ‘peace’ just does not do justice to the situation being described.

It’s a far bigger picture than we may have imagined and it is well worth digging deeper. In this new series of articles we are going to look at ourselves and our society and investigate two things; that which brings completeness and that which works against us finding completeness. By doing so we will find ourselves entering struggles, conflicts and truths at the very heart of our faith and our walk with God and I guarantee that this is a journey worth hitching a ride on, for all who are serious about the current state of the Church and where it could be going to next.

Why we should celebrate our oldies END_OF_DOCUMENT_TOKEN_TO_BE_REPLACED

Pete Phillips explains why being a Christian does not mean magical... END_OF_DOCUMENT_TOKEN_TO_BE_REPLACED

Medical doctor Erik Strandness asks whether this pandemic could... END_OF_DOCUMENT_TOKEN_TO_BE_REPLACED

Global evangelist and founder of Christ for all Nations (CfaN)... END_OF_DOCUMENT_TOKEN_TO_BE_REPLACED

Tim Keller has claimed it is "harder" to be an evangelical Christian... END_OF_DOCUMENT_TOKEN_TO_BE_REPLACED

Brothers from Lahore have been sentenced to death after posting... END_OF_DOCUMENT_TOKEN_TO_BE_REPLACED

A woman, aged in her 30s, is critically ill after being found... END_OF_DOCUMENT_TOKEN_TO_BE_REPLACED