How did we end up with clergy and laity?

And speaking of work, we hear a lot of folk working to live rather than living to work. Given the choice, most of us would prefer to work less and play more. Well that’s a Greek idea too, devaluing the act of working for a living and encouraging us to look forwards to weekends, when the real living takes place! Let’s party is the mantra of today, borne from the Greek lifestyle philosophy of hedonism. The Ancient Greeks were people of leisure, manual work was left to the slaves. For Jews it was a lot different – for some of their history they were the slaves - but that’s not the point I wish to make. The pattern of their attitude was set in the second chapter of the Bible.

God wasn’t afraid to roll His sleeves up and get on with it. He expected man to do the same.

The LORD God took the man and put him in the Garden of Eden to work it and take care of it. (Genesis 2:15)

There is great satisfaction in working, a sense of earning your keep and adding to the common good. It is also God’s plan for us. He didn’t create us to spend our lives in selfish pursuits; leisure time and entertainment should be a reward for our toil, not an end in itself. Unfortunately many in the Church today act as if it is. Did you enjoy the worship today? No, not really, perhaps we should go to a livelier Church! 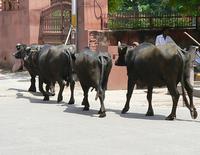 Having attacked one or two sacred cows I may as well upset the whole herd now.  There’s nothing special about a church building. It’s just a place where Christians hang out. It’s no more or less sacred or holy than anywhere else. The altar is just a table for bread and wine. The act of Communion is holy but the elements of the process are just ordinary old bread and wine. These ideas are all from Greece, telling us that what we deem as “spiritual”, even a building for meeting, is to be sought after. In fact God doesn’t just float around waiting to be summoned by his flock into certain chosen acceptable places. God is everywhere, even in brothels, crack dens and the White House, just as Jesus never hesitated in visiting places that the religious elite wouldn’t dream of setting foot in.

The word pastor comes from the Latin word for “shepherd”, referring to an individual who would care for his flock. Of course pastors perform this function, but they tend also to be the administrator, leader, teacher, preacher etc. etc. It is the Churches’ equivalent to the secular CEO, the top of the heap, the head of the hierarchy, the man with the desk slogan, “the buck stops here”. Before the pastor was established, the early Church had no titles or offices or complex hierarchies. Everything was done in an informal manner by the elders and apostles. Then in a process started by Ignatius of Antioch, in the First Century, a hierarchy slowly began to take shape within the Church, with the bishop taking on more and more responsibilities. He became the equivalent of today’s pastor, as leader and spokesman, with his finger in every pie. The word clergy, referring to the people who did all the work in the Church, started to appear, as well as laity, referring to everyone else and the die was cast in separating “professional” Christians from the rest of us. Earlier there was a suggestion that this basic concept could have been borrowed partly from the rabbis, who drew a distinction between Old Testament clergy (priests, prophets and kings) and laity (the rest). Interesting - isn’t the Church meant to be based on a New Testament model? What has Socrates done? What has the Church done?

So the Church developed hierarchies, great human edifices that served to distance the common man from his God. Christians were no longer a “priesthood of all believers” (1 Peter 2:9) and access to God was now controlled by the middle-men of the clergy, who controlled every aspect of life and became a privileged caste of society, even exempt from paying taxes or serving in the army.

Sunday, when most of us go to Church, is just a day of the week, incidentally named after the Sun god (the emperor Constantine called it the venerable day of the Sun, intending it to become the Christian day of worship). Are we just Sunday Christians? If we are then we are just closet Greeks. We are saying that our times for personal holiness are just that hour or two on Sunday morning and the rest of the week belongs to us. Those Church visiting times are not particularly special to God, what He wants from us is 24/7 reality, lives dedicated to worshipping and serving Him even at 7:30pm on a Monday when our favourite soap is on the box.

So you should now have a good grasp of the damage done by Plato’s dualism in the Church. It’s all about division and separation, clergy and laity, holy and profane, natural and supernatural and so on.

It’s no wonder that the shalom that God intended for us as a result of Jesus’ work on the cross, has been thwarted in so many ways. It has kept many away from fulfilling their potential within the Kingdom and has certainly ensured that the ‘One New Man’ ideal of Jew and Gentile in the Kingdom has never found true expression in all of the centuries of Gentile domination of the Church.

Remember back to an earlier article, where we looked not just at shalom and its theme of completeness, but at its nemesis, ra, the polar opposite, representing chaos, anarchy and division. We have now seen, in this chapter, the playing out of ra in society and the Church, forcing back any hope of shalom. In fact, the very core principle of Platonism is to bring division and to keep any sense of completeness at bay.

So, how do we deal with this? The first response in acknowledging a historical problem surely is to ensure that it doesn’t become a problem in the present and the future. In our search for true shalom in our Christian life it is now time for the fightback.

Why we should celebrate our oldies END_OF_DOCUMENT_TOKEN_TO_BE_REPLACED

Erik Strandness responds to a recent debate between ‘Side A and... END_OF_DOCUMENT_TOKEN_TO_BE_REPLACED

As health systems come under pressure our culture‘s value of... END_OF_DOCUMENT_TOKEN_TO_BE_REPLACED

Global evangelist and founder of Christ for all Nations (CfaN)... END_OF_DOCUMENT_TOKEN_TO_BE_REPLACED

Tim Keller has claimed it is "harder" to be an evangelical Christian... END_OF_DOCUMENT_TOKEN_TO_BE_REPLACED

Brothers from Lahore have been sentenced to death after posting... END_OF_DOCUMENT_TOKEN_TO_BE_REPLACED

A woman, aged in her 30s, is critically ill after being found... END_OF_DOCUMENT_TOKEN_TO_BE_REPLACED