Who speaks for us?

The Shalom of unity is what we should strive for as Christians. To do this, we need to be working together in unity:

How good and pleasant it is when God’s people live together in unity! (Psalm 133:1)

It’s not just good and pleasant, but entirely necessary:

I appeal to you, brothers and sisters, in the name of our Lord Jesus Christ, that all of you agree with one another in what you say and that there be no divisions among you, but that you be perfectly united in mind and thought. (1 Corinthians 1:10)

Let’s be honest, we often could do better on this issue. 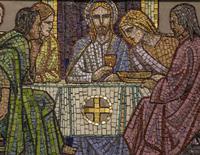 So we re-programme our minds and remove centuries of conditioning, telling us that the “Church” is basically a religious corporation, a vague controlling body on a higher plane, run by professionals and dog-collars! This is difficult, particularly for those who currently worship within the structures of a denomination, even if the local church expression gives the impression of independence.

Here is the problem and it’s one that seems to be currently growing. Some Christians are beginning to feel uncomfortable within the current system. At Foundations we are used to mopping up Christians that have left (or have been asked to leave) their churches over “contentious” issues, usually over Israel. But this is different. The thinking tends to be on the lines of, I don’t feel on the same wavelength any more or I feel uncomfortable about some of the pronouncements made by my denomination or even I can’t in all conscience stay in a church that compromises over …

There is no doubt that our society is changing, the cultural climate is becoming more restrictive and what we now say and do is under closer scrutiny than ever before. Now is the time for the Church to show unity, yet, here are some examples as representative of the problem at hand:

This is just for starters and just gives a taster of the wider problem. As the world sees these proclamations as the representatives of the ekklesia, is it no wonder that serious and worried Christians seek to distance themselves once and for all from those who will put the Biblical faith in Jesus Christ in disrepute?

Is the Church what we think it is? END_OF_DOCUMENT_TOKEN_TO_BE_REPLACED

Where does God really want us to be? END_OF_DOCUMENT_TOKEN_TO_BE_REPLACED

How do we make God really happy? END_OF_DOCUMENT_TOKEN_TO_BE_REPLACED

How does the church all fit together? END_OF_DOCUMENT_TOKEN_TO_BE_REPLACED

It is being reported that dozens of Palestinians have thrown... END_OF_DOCUMENT_TOKEN_TO_BE_REPLACED

Unbelievable? Giles Fraser and Amy-Jill Levine - Judaism & Christianity: Can we recover the Jewish Jesus?
Jesus was a Jew. But has Christianity become divorced from its... END_OF_DOCUMENT_TOKEN_TO_BE_REPLACED