What can we learn from Abraham, Joshua and Manasseh?

Here’s something that I believe is so important, yet I’ve never seen it discussed outside architecture studios. We just had a taster of it in the previous chapter, but its reach goes far beyond, finding expressions within life’s rich tapestry.

Plato made much of his theory of “Forms”, which he saw as ideal representations of everything we can see, touch and even think about in our physical world, from chairs and diamonds to geometric shapes or even concepts such as goodness. Inasmuch as he was a pagan philosopher, writing from a Greek mindset and detached from an understanding of his Creator, his theory couldn’t have been more wrong, particularly as it gave rise to the dualism that has been a scourge of humanity ever since. Rather than existing as ephemeral objects floating about in the ether, forms are very much a part of the real, physical world. Here is the only definition I can find of them, in relation to function, quoted by designer of designers, Louis Henry Sullivan, the father of the skyscraper:

"Whether it be the sweeping eagle in his flight, or the open apple-blossom, the toiling work-horse, the blithe swan, the branching oak, the winding stream at its base, the drifting clouds, over all the coursing sun, form ever follows function, and this is the law. Where function does not change, form does not change. The granite rocks, the ever-brooding hills, remain for ages; the lightning lives, comes into shape, and dies, in a twinkling. It is the pervading law of all things organic and inorganic, of all things physical and metaphysical, of all things human and all things superhuman, of all true manifestations of the head, of the heart, of the soul, that the life is recognizable in its expression, that form ever follows function. This is the law."

This is function in terms of design, rather than purpose, so perhaps we have to discard this scenario and redefine what ‘form and function’ are in God’s eyes? Now it is time for honesty. When I first started writing about form and function, introduced three years ago in Hebraic Church, all I remember is waking up at 2am in a bed in Exmouth with “form and function” in my mind. It appears that it must have been a revelation, as I can find no source anywhere for the ideas explained in that book, some of which you’ve already read at the end of the previous chapter. That may seem like a touch of arrogance, but it’s me trying to be modestly honest. I challenge you to find any other writer touching on this subject. It would be wonderful to see some reinforcement on these matters. But God continues to exercise me on this and a whole new world of possibilities has suddenly opened up. Let me explain …

As well as being our guide for reconciliation with God, the Bible, God’s instruction manual for mankind, speaks to me as a book of tasks, designed to teach us in the way we should live and act. Doctrine is good for the mind, the poetry is good for the spirit, but, unless this book can inspire us to be God’s witness in a godless world, then we’re missing something, we’re not complete, we’re not living in shalom. 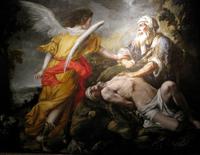 Here are just a few of the lessons we learn from the actions and thoughts of others:

“Abraham believed God, and it was credited to him as righteousness.” (Romans 4:3)

Abraham’s belief resulted in actions. He didn’t just debate with God about the possibility of allowing his son to be sacrificed, he schlepped him up the mountain to carry out the deed. This should inspire us to act on any instructions from God, even when they claw at our spirits.

Be strong and very courageous. Be careful to obey all the law my servant Moses gave you; do not turn from it to the right or to the left, that you may be successful wherever you go (Joshua 1:7)

Joshua was given instructions directly from God, concerning what he had to do for him and his people to prosper, in the land they had inherited. Everything was going to hang on Joshua’s response to these instructions, it was all about practice not theory. We, of course, must take note of this and also live our lives according to God’s Word.

In his distress he sought the favour of the Lord his God and humbled himself greatly before the God of his ancestors. And when he prayed to him, the Lord was moved by his entreaty and listened to his plea; so he brought him back to Jerusalem and to his kingdom. Then Manasseh knew that the Lord is God. (2 Chronicles 33:12-13)

The most evil king of Judah had turned to the Lord and mended his ways, even throwing out all of the pagan altars. His repentance was genuine and God forgave him. He was saved by his actions, just as his previous actions had condemned him. This gives us an amazing picture of the God of grace and should encourage us to realise that, if the most evil king of Judah can be forgiven then so can we, as long as our repentance is genuine and accompanied by actions.

Abraham was a clan leader, Joshua a military commander and Manasseh was a king. These are their forms, their identity, but their forms did not define them. It was their individual functions, their deeds and actions that grafted them into the pages of the Bible.

Abraham was no ordinary clan leader, he was the one who left the safety of his home town and travelled to a strange land, answering the call of a God who had much for him to do. His function was defined by his name, Abraham, Avraham, “Father of many nations”. He was to be the great example of a faith-filled man, one who received a legacy, implied by his name, that would reverberate through history.

Joshua wasn’t your average military commander. He was to oversee the conquering of the Land of Canaan and was under no illusion that this was only going to be achieved if he and his army were to comply with God’s plan. Again this is implied by his name, Joshua, Jehoshua, “God is Salvation”. God will save His people, physically, through conquest, at the hand of His servant Joshua.

Manasseh wasn’t a typical king of Judah, he was by far the worst. His name means “to forget”, which is a curious but fitting legacy for a man who, although he repented at the very end, created much havoc in the fifty odd preceding years! Best forgotten, really.

Why we should celebrate our oldies END_OF_DOCUMENT_TOKEN_TO_BE_REPLACED

Why did the Church stop celebrating the Sabbath on a Saturda... END_OF_DOCUMENT_TOKEN_TO_BE_REPLACED

Is the Church what we think it is? END_OF_DOCUMENT_TOKEN_TO_BE_REPLACED

How do we make God really happy? END_OF_DOCUMENT_TOKEN_TO_BE_REPLACED

The Supreme Court appeal for Asia Bibi will begin on Monday in... END_OF_DOCUMENT_TOKEN_TO_BE_REPLACED