Why did the Church start celebrating the Sabbath on a Sunday?

In Roman times, if this new “religion” of Christianity was to be an effective tool for the State, then it needed to realise that it had to abide by the State’s rules. It suited Constantine and those who followed to declare to the people that their only religious obligations were to attend Church on a Sunday and try to abstain from work that day. Thus was born the Sunday “Sabbath”, a day that has retained this prescribed function right up to today. This is a day when many Christians, unconsciously following the dualistic mindset of Plato, grant a few hours of their time to “spiritual matters” and retain the rest of their time for their own purposes. And, of course, the “day of rest” motif has gradually been eaten away by creeping secularisation, with High Streets usually busier and noisier on a Sunday than any other day of the week! 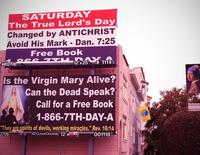 And on a curious but telling note, the actual word Shabbat (Sabbath) has the three letter Hebrew root of Shin – Bet – Tav. Although the popular translation of this is as “rest”, a secondary translation focusses on the letters themselves and notices their similarity to the Hebrew word for the number seven, Sheba, Shin – Bet – Ayin. This builds up a very strong case for this holy day being celebrated on the seventh day, highlighted by its very name. In this way, the idea of a Shabbat being celebrated on the first day of the week, makes little sense.

So what can we do, those of us who feel that the seventh day Sabbath has never been rescinded, Biblically speaking?

These verses are unique in that they contain the first appearance of the word Kadosh, holy. According to Abraham Heschel, in his book “The Sabbath” (p. 9, 10):

“There is no reference in the record of creation to any object in space that would be endowed with the quality of holiness. This is a radical departure from accustomed religious thinking. The mythical mind would expect that, after heaven and earth have been established, God would create a holy place – a holy mountain or a holy spring – whereupon a sanctuary is to be established. Yet it seems as if to the Bible it is holiness in time, the Sabbath, which comes first … The meaning of the Sabbath is to celebrate time rather than space. Six days a week we live under the tyranny of things of space; on the Sabbath we try to become attuned to holiness in time. It is a day on which we are called upon to share in what is eternal in time, to turn from the results of creation to the mystery of creation; from the world of creation to the creation of the world.”

There is undoubtedly something special about the Sabbath in Jewish thinking. Sages throughout the ages have eulogised this day to the extent of almost deifying it. Here are some examples:

“It is a day for the soul, not of the body. It is the sweetness of souls, the delight of spirits, and the bliss of souls, to be blissful with the love and awe of the Blessed One.” (Rabbi Shalom Noach Berezovsky)

“… through a sincere attempt to honour it and enjoy it for the sake of heaven, the Jew earns God’s blessing that the Sabbath become holy and radiate its aura into every aspect of his life”. (Rabbi Nosson Scherman)

“The Sabbath is the presence of God in the world, open to the soul of man”. (Rabbi Abraham Heschel)

There are literally thousands more similar quotations by Rabbis through the ages. I was curious whether there was an equivalent trove of quotations by Christian writers and thinkers, regarding the Sunday Sabbath. I found none, though I didn’t look very hard. To be honest, if such a collection existed then it wouldn’t have been hard to find it.

So what does that tell us? It points to a reverence of the Sabbath as a day in its own right, a holy day instituted by God, backed up by Holy Scripture. This is the Jewish position, but it is not the majority Christian position. There is nothing intrinsically holy about the Sunday Sabbath in the sense of it being divinely appointed, it is simply a political appointment, with the tenuous association with the day of Christ’s resurrection, rather than any divine command that it be a “day of rest”. The Saturday Sabbath is a Biblical imperative. The Sunday Sabbath is a marriage of convenience.

Why did the Church stop celebrating the Sabbath on a Saturda... END_OF_DOCUMENT_TOKEN_TO_BE_REPLACED

What should Gentiles do about the Sabbath?  END_OF_DOCUMENT_TOKEN_TO_BE_REPLACED

When is the Sabbath and what’s it all about? END_OF_DOCUMENT_TOKEN_TO_BE_REPLACED

Do we take God’s name in vain?  END_OF_DOCUMENT_TOKEN_TO_BE_REPLACED

It is being reported that dozens of Palestinians have thrown... END_OF_DOCUMENT_TOKEN_TO_BE_REPLACED

Unbelievable? Giles Fraser and Amy-Jill Levine - Judaism & Christianity: Can we recover the Jewish Jesus?
Jesus was a Jew. But has Christianity become divorced from its... END_OF_DOCUMENT_TOKEN_TO_BE_REPLACED