Youth and the Bible

Is our youthwork Biblical?

Let me take you back to the 1780s. In Gloucestershire, William King had a bright idea. He would set up a school for the boys of the slums, who were working six days a week in the factories. The only day this would work was a Sunday and thus was born the Sunday school movement. They were taught to read stories from the Bible. The movement grew and by 1831 well over a million children were taught in this way and it has been called the forerunner of the state school system. Yet it wasn’t without its detractors and there was a backlash from many in the Church who argued that this system was weakening the traditional family-based education. On the positive side it had become a dumping ground for unbelieving parents to ensure a quiet peaceful Sunday morning with a convenient perk that the kid is probably in safe hands and what’s wrong with a bit of religion anyway? The negative side for some modern Christian educators is that it has become a dumping ground for believing parents too! So why has this been seen as a problem?

Well, it’s back to that original backlash in the early days of the movement. It is still relevant today. In fact it runs to the very heart of what seems to be going wrong in youthwork today.

Here is a quote from someone who has seen it, done it:

"We have to go back to what does the Bible say? There's something fundamentally wrong with the church's drive to say we can do a better job of raising your children than you can," (Boyd Dellinger, lead pastor of Heritage Bible Fellowship in Fayetteville, N.C. and a former youth pastor)

And also by someone who has come through the system and has written about it.

“Youth ministry doesn’t have much biblical support. Where is parent to child? Parents don’t feel equipped and so give kids over to ‘experts’” (Brett Mccracken, Hipster Christianity)

So what does the Bible say? Does it recommend that children are educated by anyone other than immediate family? Are there youth workers in Scripture? Is youthwork a recognised activity?

Here is one of the earliest instructions from God Himself, to His people, through the mouth and writings of Moses: 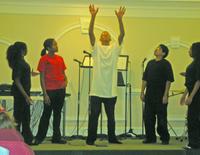 These are the commands, decrees and laws the Lord your God directed me to teach you to observe in the land that you are crossing the Jordan to possess, so that you, your children and their children after them may fear the Lord your God as long as you live by keeping all his decrees and commands that I give you, and so that you may enjoy long life. (Deuteronomy 6:1-2)

These commandments that I give you today are to be on your hearts. Impress them on your children. Talk about them when you sit at home and when you walk along the road, when you lie down and when you get up. Tie them as symbols on your hands and bind them on your foreheads. Write them on the doorframes of your houses and on your gates. (vs. 6-9)

Impress them on your children. The Hebrew word used here, shanan, indicates a sharpening process. The teaching is to be precise, direct, deep and relevant. What is to be taught is to be lived out and then passed on to the next generation. The pupil is to eventually become the teacher.

And what about the New Testament? Here are some familiar verses:

Children, obey your parents in the Lord, for this is right. “Honour your father and mother”—which is the first commandment with a promise “so that it may go well with you and that you may enjoy long life on the earth.” Fathers, do not exasperate your children; instead, bring them up in the training and instruction of the Lord. (Ephesians 6:1-4)

It’s a contract between fathers and their children. By all means teach them in the ways of the Lord, but don’t exasperate them. In turn, the children must honour their parents, a command linked to a promise that seems to link their obedience with good favour. Not to be sniffed at, everything in God’s word has meaning, there has to be truth there, now as well as in Bible times.

So here we have the Biblical model, family-centred education. Boyd Dellinger adds, "God has appointed fathers to lead their children; not for someone else to do it just because they have a college degree or some seminary training. That does not qualify someone to all of a sudden become the spiritual leader of your family."

We live in an increasingly secular culture. This should challenge... END_OF_DOCUMENT_TOKEN_TO_BE_REPLACED

That was the challenge levelled at historian Tom Holland on The... END_OF_DOCUMENT_TOKEN_TO_BE_REPLACED

Rachel and the Resurrection

An enthusiastic look at what difference the resurrection could... END_OF_DOCUMENT_TOKEN_TO_BE_REPLACED

Medical doctor Erik Strandness asks whether this pandemic could... END_OF_DOCUMENT_TOKEN_TO_BE_REPLACED

Global evangelist and founder of Christ for all Nations (CfaN)... END_OF_DOCUMENT_TOKEN_TO_BE_REPLACED

Tim Keller has claimed it is "harder" to be an evangelical Christian... END_OF_DOCUMENT_TOKEN_TO_BE_REPLACED

Brothers from Lahore have been sentenced to death after posting... END_OF_DOCUMENT_TOKEN_TO_BE_REPLACED

A woman, aged in her 30s, is critically ill after being found... END_OF_DOCUMENT_TOKEN_TO_BE_REPLACED