What should we do with the kids … ?

Just because a Christian activity is so generally accepted that it is defined by a single word, employs an army of practitioners and is practically a subculture within the Christian world, it doesn’t mean it is the only, or the best way of fulfilling its brief.

This point is driven home when we discover that modern youthwork feeds on principles first put forward by no less than Plato himself, the scourge of Christianity! Here is someone who has featured consistently in our investigation of what has gone so wrong with the Western Church. For the full story perhaps you should read How the Church lost the Way, but if you want it quick and easy, the following paragraph should bring you up to speed. 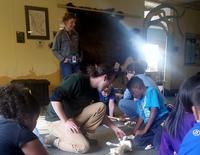 Plato was a pagan Greek philosopher from the 4th Century BC who came up with the idea of dualism, a division between the spiritual and physical, and hence with the spirit and the body. This idea infiltrated the early Church, thanks to many of the Church Fathers, such as Justin Martyr and Origen and ensured that Western Christianity would be infected with ideas and practices that were to bring division, rather than the completeness, wholeness and shalom promoted in the Scriptures and the teachings of Jesus.

One aspect of this was Plato’s view on child-rearing, as explained in his most famous work, The Republic (Book 5), where he recommended that children should be taken away by nurses and that parents should not be allowed to know their own children. This is extreme but the principle is one of separation, a natural result of his philosophy of dualism. This was further developed by Jean-Jacques Rousseau, the 18th Century Swiss philosopher, who said, ‘make the citizen good by training and everything else will follow’. The accent is on the creation of good citizens, by taking responsibility of education away from the parents and on to the state. Rousseau had the belief that mankind is basically loving and good and that it is human society that corrupts. This gave him an idealistic view of children, an idea taken up by Friedrich Froebel a few years later, who saw them as agents of change and, as such, should be allowed freedom to explore new ways and think new things.

Froebel was the founder of the kindergarten movement, designed to put theory into practice and once wrote, “… what is yet to come out of mankind, what human nature is yet to develop, that we do not yet know. And since we do not know where evolution will go next, we cannot impose any direction on the evolving child.” It seems that children were becoming pawns in some great social experiment, something taken to the next stage by G. Stanley Hall, an American educator at the end of the 19th Century, keen on exploring the ‘in-built divinity within each child’ and not to stand in the way of the child’s natural tendencies and development. He was the founder of child psychology and leant a lot on the work of Charles Darwin and Sigmund Freud. In fact he was called ‘the Darwin of the mind”. The next person to pick up this particular baton was the key American educational reformer of the early 20th Century, John Dewey. Dewey’s legacy is centred on the age-separated classroom system that is the cornerstone these days of how we educate the next generation, with the accent on social and educational theory and philosophy and the relativism (“no such thing as absolute truth”) that is now prevalent in our politically-correct society.

At this point I would like you to note one thing; none of the above were working from within a Biblical perspective, in fact all were ardent atheists and, apart from Plato (who predated it), they were vehement opponents of Christianity. Yet each was instrumental in a process of child-education that was to take the child away from the family and on to the State, into the hands of people that could have had a very different mindset from the child’s parents. Yet there was a time when this seemed to be a good thing … more next week.

Is the Church what we think it is? END_OF_DOCUMENT_TOKEN_TO_BE_REPLACED

Why did the Church start celebrating the Sabbath on a Sunday... END_OF_DOCUMENT_TOKEN_TO_BE_REPLACED

How can Jews and Gentiles learn to play nicely together in the... END_OF_DOCUMENT_TOKEN_TO_BE_REPLACED

Who speaks for us? END_OF_DOCUMENT_TOKEN_TO_BE_REPLACED

A Muslim father has been convicted of racially abusing staff... END_OF_DOCUMENT_TOKEN_TO_BE_REPLACED

Christians in Russia are now banned from discussing their faith... END_OF_DOCUMENT_TOKEN_TO_BE_REPLACED