Written between 960 BC and 425 BC, the Old Testament books of Samuel and Chronicles have a lot in common. From genealogies, to Kings, to history, both books largely record the same information. Some have wondered what the purpose of this is. Why repeat information already recorded? Well, some of the accounts actually provide us with additional details. This helps to give us the complete picture of what happened, much like two or more eyewitnesses in a murder investigation. Not all of the details may be as important, but it’s still helpful to know everything that transpired before reaching a verdict. And it’s no different with the Biblical record of events.

One such event recorded in both Samuel and Chronicles is King David’s numbering of Israel. This has become the subject of contention because, when taken out of context, the verses seem to be in conflict:

“And Satan stood up against Israel, and provoked David to number Israel.”
1 Chronicles 21:1

“And again the anger of the Lord was kindled against Israel, and he moved David against them to say, Go, number Israel and Judah.”
2 Samuel 24:1

Many skeptics leap off their chairs and proclaim this is the proof text that shows the Bible is in error. But as we will see, a full reading of the context reveals that both events happened and both passages are true. In fact all of the alleged biblical "contradictions" can be immediately resolved when you examine the context and compare scripture with scripture. If you simply apply the principles we are about to explore to The Bible, you will realise it does not have any contradictions, whatsoever. The case of King David and the numbering of Israel is just one such example. And as we examine its history, context, authorship and other relevant scriptures this will become clear.

Firstly, the authors of Chronicles (writing between 450 and 425 BC), both had access to, and had read the earlier account recorded in 2 Samuel (960 BC). They even state this explicitly in chapter 29:

“Now the acts of King David, from first to last, are written in the Chronicles of Samuel the seer”
1 Chronicles 29:29

They would have used the 2 Samuel 24 passage when writing their account. No scribe is going to copy details of an existing historical account without reading it first. The Chronicles of Samuel passage would have been open in front of them. Careful and meticulous detail went into writing the Hebrew Scriptures. It was also commonplace for Jewish scribes to commit the entire Torah (Old Testament) to memory.

Saying something was from God or Satan is little hard to confuse. Can skeptics really expect us to believe the authors of Chronicles somehow misread this in Samuel's account? That is clearly ridiculous.

The full context of both passages reveals they are talking about the same event from two different angles. 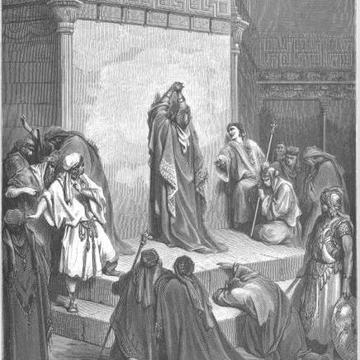 King David is provoked to number Israel and commands his captain, Joab to carry this out. Recognising his transgression, Joab objects to the King's order but is eventually overruled. The people are then numbered with the exception of the tribes of Levi and Benjamin because of Joab’s disdain for the command. God’s anger is kindled against Israel and he brings judgment through an angel because of David's sin. The repentant David then confesses and offers sacrifice in atonement to God, who in turn, relents from destroying Jerusalem.

One of the major keys to understanding how both passages fit together is God's anger. Specifically, why was the anger of the Lord kindled against Israel? If you read 2 Samuel 24:1 in context, there is absolutely nothing before David's sin to suggest why God was angry. The only time we’re explicitly told why is in the Chronicles account:

“And God was displeased with this thing (David's sin in the context); therefore he smote Israel.”
1 Chronicles 21:7

God's anger against Israel is a result of David's failure. The entire nation is judged because the Bible tells us they are all one in the sight of God. When there is sin in the camp everyone suffers the consequences (see Achan's sin in Joshua 7).

What is clear from the two passages is that Satan was the one who provoked David directly (1 Chronicles 21:1). God only moved David in that he gave Satan permission to provoke him; probably to test his heart.

The book of Job shows us this same principle and provides solid proof that it's true. In the story, Satan and the angels present themselves before The Lord. During the celestial display, Satan requests God's permission to afflict his faithful servant, Job. The devil insists that Job only serves God because of His blessings, and if he were to be tested he would surely curse Him to the face. God conditionally grants Satans request and the story unfolds, but here's where the book provides us with some fascinating insights:

And they bemoaned him, and comforted him (Job) over all the evil that the Lord had brought upon him Job 42:11

Even though we're repeatedly told that Satan brought the evil against Job throughout the book, chapter 42 still identifies God as ultimately in control. (It's also important to note that the devil must always ask for God's permission to test his servants. See Job 1:6-12).

This reveals a paradox. God only brought the evil against Job in that he gave Satan permission to afflict him in order to test his heart. This shows God sovereignty over the situation and it seems like the same sort of thing happened with David.

It was, of course, David's free choice to give in to the temptation, just as it was with Job. And the book of Romans also illustrates what happens when people deliberately reject God’s truth in their hearts and minds. God gives them over to their sin:

“Who changed the truth of God into a lie, and worshipped and served the creature more than the Creator, who is blessed for ever. Amen. For this cause God gave them up unto vile affection."

"And even as they did not like to retain God in their knowledge, God gave them over to a reprobate mind, to do those things which are not convenient"

God may have given David over to number Israel in response to what David had already determined to do in his heart.

Essentially, God is saying, “Go ahead.” 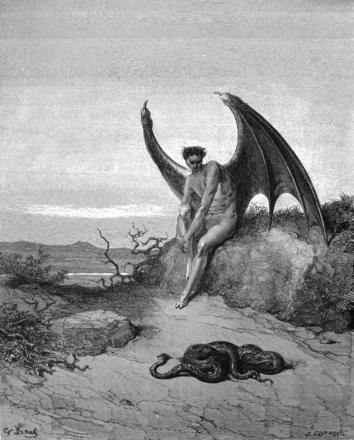 If skeptics want to disagree with this they have a lot to explain. Again, saying something was from God or Satan is little hard to confuse. The Bible writers obviously had a purpose when they decided to mention Satan’s involvement in Chronicles. To suggest otherwise makes no sense. Again, no Jewish scribe is going to make a "mistake" like that when they have the Samuel account open in front of them.

Moreover, don’t the skeptics also claim the Bible has been “changed” or “edited” throughout history. The ancient Hebrew writers knew what their Torah said. If they thought this was a glaring contradiction, why didn’t they change it? Obviously, they saw no conflict here. Ironically, by claiming this is a contradiction, the skeptics are really contradicting themselves. So even if you disagree with the interpretation presented above, you still have to recognise the authors of Chronicles obviously had a purpose in mind. There’s just no escaping it.

So in summary, both passages reveal a paradox. God did not directly provoke David but he was sovereign over the situation. God only moved David in that he gave Satan permission to provoke him in order to test his heart. When David refused to retain God's truth in his knowledge, he was given over to his sin.

Both passages give us an account of the same event from two different angles. Taken together, the eyewitness details give us the complete picture of what happened and this helps us reach the verdict that both passages are true.

Recommended Resource: Why was God so angry at David for taking the census? - Got Questions

Adam Brennan is a Digital Producer at Premier