Thousands of years ago, King David of Israel wrote one of the most specific and remarkable prophecies in history. Contained in the Psalms (the ancient Hebrew scriptures of the Bible), it describes one man's harrowing and torturous execution.

Read through the prophecy below and ask yourself who and what is this describing?

'For dogs have compassed me: the assembly of the wicked have inclosed me: they pierced my hands and my feet. I may tell all my bones: they look and stare upon me. They part my garments among them, and cast lots upon my vesture.'

At first glance, most people would say it's referring to the crucifixion of Jesus. But what you might be surprised to discover is that this prophecy was written 1,000 years before Jesus was born and centuries before Roman crucifixion was even invented. How did King David predict the future by saying this would happen to the Jewish Messiah?

The prophecy itself came to fulfillment in Jerusalem around 33 AD when Jesus was executed by the Romans:

'And when they had crucified him, they parted his garments, casting lots upon them'

The crucifixion of Christ under the Roman official, Pontius Pilate, is one of the most well-established facts of history. Even German atheist scholar, Gerd Ludemann declares, 'Jesus’ death as a consequence of crucifixion is indisputable.'

'Then came the soldiers, and brake the legs of the first, and of the other which was crucified with him. But when they came to Jesus, and saw that he was dead already, they brake not his legs' 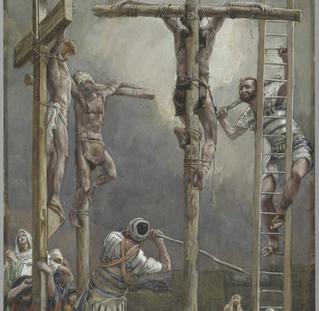 Former atheist and legal editor of the Chicago Tribune, Lee Strobel explains, 'To hasten death on the cross Romans would typically take a heavy mallet and shatter the shin bones of the victims of crucifixion so they could no longer push up on the cross and breath properly.' This was a practice known as crurifragium.

Psalm 22 also says that the Messiah's persecutors would gamble for his clothing (fulfilled in Matthew's gospel account):

‘And they crucified him, and parted his garments, casting lots’

According to distinguished Professor of Religion at Liberty University, Ed Hindson, ‘That was typical of Romans. You'd strip the guy’s clothes off and put him on the cross and so any of the clothing considered of any value at all, they would gamble for.’

How was King David able to foresee and specify the execution practices of the Roman Empire which wasn't even in existence when he wrote this Psalm a thousand years before Christ?

Many people, including the former atheist and New York Times Bestseller, Lee Strobel would argue that divine inspiration makes the most sense of the evidence. 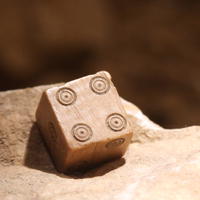 Bible Gateway says some critics charge that the word "pierced" in Psalm 22:16 is an incorrect translation that Christians later imposed to make it look like the verse foreshadows the crucifixion. The critics claim that the proper rendering of the Hebrew should be, “Like a lion, they are at my hands and feet.” But this criticism is misplaced.

According to the popular Bible answer resource Got Questions, the two Hebrew words for pierced and lion are similar but in "the Dead Sea scrolls, which predate most other Hebrew texts by over a thousand years, the term is unmistakably pierced.”

I also contacted Got Questions personally to get clarification on this. I asked them if there are any Hebrew manuscripts that predate the scrolls which have the lion reading. They told me there are none. All the manuscripts with the lion reading, they said, were written over 1000 years or less after the Dead Sea Scrolls.'

The Silver Scrolls are technically the oldest known copies of the biblical text but all they contain is the priestly blessing from Numbers 6 which was commonly used in Israel. They do not contain Psalm 22 or anything else from the Bible.

Got Questions also states, "the oldest Syriac, Vulgate, Ethiopic, and Arabic versions go with “pierced.” The same is true in the Septuagint, the first Greek translation of the Hebrew Scriptures, which was supposed to have been completed approximately 200 years before the birth of Christ."

But even if we were to assume “Like a lion, they are at my hands and feet” is the correct translation, there's still no escaping the crucifixion prophecy.

Dr. Michael Brown, whose doctorate is in Near Eastern languages and literature puts it this way: "What is the lion doing with the victim’s hands and feet—licking them? The renowned Jewish commentator Rashi says it means ‘as though they are crushed in a lion’s mouth.’ So the imagery is clear: The metaphorical lions are tearing and ripping at the sufferer’s hands and feet. This mauling and biting graphically portrays great physical agony. It’s entirely consistent with what occurs in a crucifixion. So either translation could be said to foreshadow the suffering of the Messiah."

But aside from the manuscript evidence its also clear from the context that 'pierced' is the genuine reading, especially when the other contains no sense at all.' (The literal Hebrew reading of the lion translation is simply "Like a lion, my hands and my feet)

History also confirms the much earlier translation. In 150 AD, Justin Martyr informed Emperor Antonius Pius, 'They pierced my hands and my feet (Psalm 22:16) refers to the nails which were fixed in Jesus' hands and feet on the cross.'

Jesus himself even quotes Psalm 22:1 while hanging, pierced, on the cross (Matthew 27:46) which shows he is fulfilling the prophecy. It doesn't get any clearer than that.

It seems obvious that the critics only want to reject this translation because of the prophecy's supernatural implications.

In the Dead Sea scrolls, the term is unmistakably “pierced.”

But couldn't Jesus have just tried to make it fit with the prophecy?

There is no way Jesus could have orchestrated both his death on the cross and all the prophesied events surrounding it. There was simply too much that was outside of his control. He was nailed to the cross (Psalm 22:16) his bones were not broken before his death (v17, Psalm 34:20), His garments were gambled for (v18). In addition, he was pierced in the side with a spear revealing his heart had burst (Zechariah 12:10, Psalm 22:14, John 19:34-37), he was crucified between criminals (Isaiah 53:12), there was darkness over the land at noon etc... (Amos 8:9, Matthew 27:45).

Crucifixion itself was also one of the most agonising deaths you could face. No-one would willingly go through with it if they knew they weren't really the Messiah. 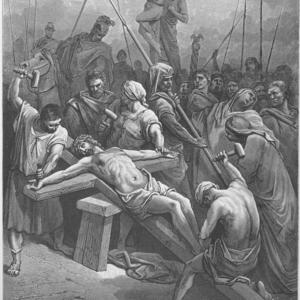 Lastly, we should also consider the fact that Jesus fulfilled several hundred prophecies just like this in his earthly ministry. This is clear proof that he is the Messiah spoken of in the scriptures and Bible prophecy is one hundred percent true!

So what do you think? Has the Bible nailed the skeptics to the wall?

Blood and water running out of the pierced side is a clear medical sign that the heart had literally burst.

The darkness over the land during the crucifixion is confirmed by Thallus 52AD. But he attributed it to a solar eclipse. This theory was refuted later however by Julius Africanus writing in 220AD. He said, "A solar eclipse cannot take place at the time of a full moon and it was at the time of the pascal full moon Christ died." This indicates the darkness was in fact a supernatural fulfilment of Amos' prophecy.

Skeletal Evidence For Crucifixion In The Ancient World

The games played by Romans

He Walked Among Us: Evidence for the Historical Jesus by Josh McDowell, Bill Wilson, Thomas Nelson Inc.