Have these 5 celebrities become Worship icons?

In today’s culture there is probably more false worship than ever. False gods no longer take the form of golden calves and wooden images like in ancient times. Today, they are living and breathing. Mankind has become the new 'god' and this is perhaps most clearly seen in the celebrity culture, particularly the music industry. Arguably, many of the figureheads hailed as ‘modern gods' today aren't necessarily trying to be one, or even worshiped for that matter. However, there most devoted followers don't let that hinder them from worshipping them anyway.

But how can we know this for sure? Isn't it just a bit over the top to suggest that celebrities are literally being idolised in this way? Well, let's first consider the Bible's definition of what worship means.

Contrary to popular belief, the word worship in the Bible literally means giving one's life as a sacrifice and service to God. It does not simply refer to what you sing together in church.

'I beseech you therefore, brethren, by the mercies of God, that ye present your bodies a living sacrifice, holy, acceptable unto God, which is your reasonable service.'

What is false worship?

The Bible is clear that man was created to worship God alone. But when that doesn't happen, we won't simply worship nothing, we will worship anything. This is called false worship and it occurs when the object of man's worship turns from the Creator to the creation. This is outlined in the book of Romans:

'Who changed the truth of God into a lie, and worshipped and served the creature more than the Creator, who is blessed for ever. Amen.'

So using the biblical example of worship above, here is a list of 5 popular music icons (deceased or alive) who have been deified by the culture. 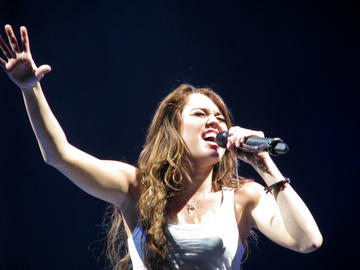 Former Disney star Miley Cyrus has certainly made a name for herself. She went from squeaky clean teen in the acclaimed Hannah Montana series, to pop superstar bad girl. Such a status carries with it a lot of weight and certainly a lot of devoted fans. Perhaps none more devoted than Carl McCoid from Yorkshire.

In 2015, The Mirror released a story which reported that McCoid had covered his body with 29 tattoos in tribute to the pop sensation. In his own words, it cost him the chance of finding a relationship and consequently impacted his life in a negative way. Unsurprisingly, Carl now regrets his decision but still openly admits his obsession with Cyrus.

While there is nothing inherently wrong with getting a tattoo, the practice has been used historically as a form of demon worship. In any case, Cyrus was certainly deified by this man. The fact that he would be willing to sacrifice his time, money and appearance in order to express his devotion is a clear example of false worship.

Miley Cyrus’ presence on Twitter is also significant. She currently has over 35 million followers. That’s more than twice the estimated followers of Judaism today! 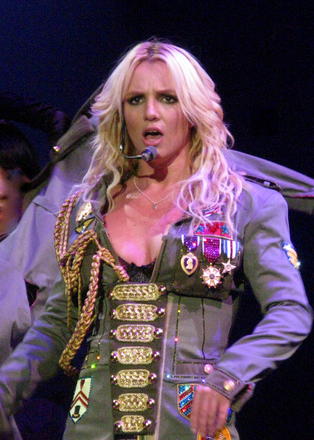 After staying in a drug rehab facility in 2007, Britney Spears shaved her head and was caught on camera lashing out by the paparazzi. There were reports of a number of fans who decided to shave their own heads out of tribute to Spears.

Later that same year, a viral video was released called ‘Leave Britney Alone.’ It features the self-described ‘androgynous’ Chris Crocker screaming and crying hysterically at people who made fun of Britney’s comeback performance at the MTV Video Music Awards.

According to Wikipedia, his video garnered over four million views in two days. It's quite remarkable how someone who had never even met Spears could feel so emotionally connected to her. So connected in fact, that he was willing to release a video to millions defending her honour.

Such a practice would be regarded as a sign of religious devotion in some circles. That’s why Ms. Spears makes number 4 on our list.

Most recently on TwitterCounter, Britney is reported as having over 55 million followers, making her one of the top 15 most followed celebrities on the social media platform. That’s even more than revered religious, or political leaders such as The Pope or The President of the United States! 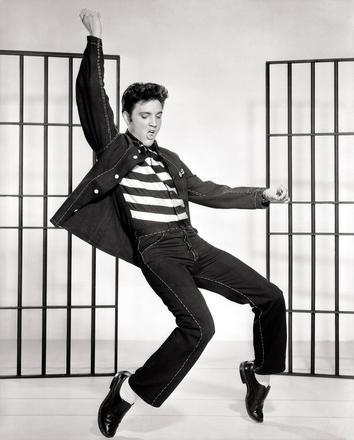 Each year, thousands of fans make 'the pilgrimage' to Graceland to pay tribute to the Rock n’ Roll legend known simply as, The King. This takes place in a candlelight vigil at the Meditation Gardens gravesite where Elvis is buried.

According to Erika Doss, author of the 1999 book Elvis Culture: Fans, Faith & Image, it resembles,'Traditional religious practices, from the ceremonial ambience of midnight mass services at Christmas to the precisely timed vigils at the Shrine of St. Jude in Chicago, where candle lighting marks the beginning and the end of each pilgrim’s devotional encounter.'

Here is a quote from Robert Christgau, an American music journalist, and self-proclaimed 'Dean of American Rock Critics.'

'I know he (Elvis) invented rock and roll, in a manner of speaking, but ... that's not why he's worshiped as a god today. He's worshiped as a god today because in addition to inventing rock and roll he was the greatest ballad singer this side of Frank Sinatra—because the spiritual translucence and reined-in gut sexuality of his slow weeper and torchy pop blues still activate the hormones and slavish devotion of millions of female human beings worldwide.'

Ironically, Elvis would probably be spinning in his grave if he knew how much he has become worshipped in popular culture. He even shied away from his notorious title as 'the king' while alive. Perhaps this is no clearer than in this famous quote:

"I can't accept this kingship thing because to me there is only one, which is Christ." 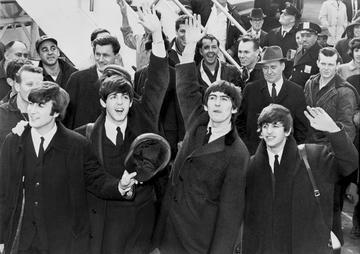 There is a truly remarkable piece of footage from CBS News which gives a taste of Beatlemania in the 1960's. The footage contains interviews and footage of fanatical fans. In one interview, a girl claimed to kiss the limousine that lead singer, Paul McCartney looked out of.

Young, adolescent girls would come out as early as 6 o'clock in the morning just to get a glimpse of the Liverpudlian band. In another TV interview, a young woman was almost hysterical when trying to express her frustration at police for preventing her from seeing them.

Upon arriving in the States for an American tour, Paul McCartney said that the Police instructed the band not to approach the windows or wave at fans (presumably, because of the mass hysteria it would cause.)

Two women allegedly tried to sneak into The Beatles hotel room during the US tour before being apprehended on the 12th floor by security. Later, when the women were being interviewed they openly admitted, ‘We don’t know why we’re like this!”

This has to be one of the clearest examples of false worship on our list. How else would anyone describe this kind of fanatical devotion? Ironically, perhaps no-one had more reverence for The Beatles in the 1960’s then The Beatles themselves. John Lennon once made the controversial remark that the band was, 'More popular than Jesus.' 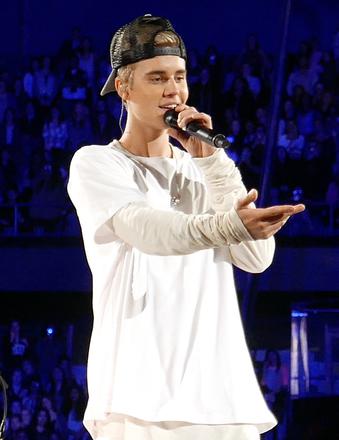 Perhaps no male figure on the planet today is 'worshipped' with more devotion and service than Justin Bieber. Phrases such as ‘I’m a belieber’ and even 'Believe in Bieber' can be seen everywhere at his concerts. According to justinbieber.wikia.com, the term refers to a fanatical movement of fans (many of them teen girls). The word has become so widespread that it now appears in some dictionaries. Perhaps most disturbing of all is the lengths these extreme fans will go to to express their devotion.

'Many beliebers strictly defend and support Bieber and may resort to extreme methods to protect him against anything they deem as a threat, such as issuing death threats to women connected to Bieber, and defacing Wikipedia after he failed to win a Grammy.'

One could almost draw a parallel with some sects of extremist Islam. What happens when the Prophet Muhammad is insulted or degraded? For a celebrity to be ‘served’ in this way where fans threaten violence on his perceived adversaries is certainly a disturbing trend, and a striking example of false worship. It's for that reason that Mr Bieber is number one on our list.

Justin is also highly revered on Twitter with an astounding 99.3 million followers to date. To put that into perspective, there are approximately 30 million Sikh’s in the world today!

Arguably, Justin may hold similar sentiments to Elvis in that he often uses his fame as an opportunity to glorify God. Most recently he told his 89.5 million followers on Instagram the following:

"The devil has no power when you know the LIVING God! His name is JESUS!! Why worry when you can worship!"

So that is five worshipped music icons. And when we consider the Biblical definition of worship such as sacrifice, service and reverence, it's clear that this is a widespread epidemic in modern culture. We’ve only discussed 5 examples after all. There are many more celebrities that could have easily made it onto this list.

The Bible is clear that God is supposed to be the object of our worship:

'And we know that the Son of God is come, and hath given us an understanding, that we may know him that is true, and we are in him that is true, even in his Son Jesus Christ. This is the true God, and eternal life.'

Some people may object to the idea of false worship presented here. Can we say fans are worshipping 'a god' if they don’t believe in God to begin with? The simple answer to that question is this. What is consuming your life? What is the object of your devotion, your service, your love? What would you be willing to sacrifice anything in the world for? Maybe it's your family, your friends, your career or your future. Well, if the answer isn’t Jesus Christ, then that is your god.

Adam Brennan is a Digital Producer at Premier

All Together Now with Pam Rhodes

Schedule
Full Schedule
Insight for Living
Inspirational Breakfast
Leading the Way
Telling the Truth
Faith, Hope and Love
All Together Now with Pam Rhodes Live
All Souls In Praise Bitesize
Daytime with Charmaine Noble-McLean
The Urban Alternative with Dr Tony Evans
Daily Hope with Pastor Rick Warren
Grace To You
You may also like...

Let's welcome Jesus into our hearts and homes, to celebrate his... END_OF_DOCUMENT_TOKEN_TO_BE_REPLACED

Extinction Rebellion (XR to its friends) is a campaign movement... END_OF_DOCUMENT_TOKEN_TO_BE_REPLACED

The growing influence of secularism

Global evangelist and founder of Christ for all Nations (CfaN)... END_OF_DOCUMENT_TOKEN_TO_BE_REPLACED

A vicar has been found dead in woodland near his home in West... END_OF_DOCUMENT_TOKEN_TO_BE_REPLACED

Rev Franklin Graham has spoken out against those who have supported... END_OF_DOCUMENT_TOKEN_TO_BE_REPLACED