Having first come to the UK in 1998 for major surgery after a diving accident left him with a damaged facial nerve, Falak trained for the ministry and has worked as a priest for 13 years with the Pakistani and wider Muslim communities in Greater Manchester.

He said, “I feel honoured to be recognised as a Pakistani Christian, and the Muslim community to whom I am well known are very proud of me!”

Falak has worked tirelessly to find imaginative ways to help build bridges with ethnic communities in the city. At St Edmund’s, Whalley Range he was curate to Christians from the Pakistani community. They now worship at St Werburgh’s in Chorlton, and the new Fresh Expression for young families, Global Harmony, offers a bilingual service that is attracting young families.

Falak also supports Ugandan Christians who worship at The Ascension Hulme. Services are held in their own language and also together with the regular congregation.

Falak is well known to the Muslim community and, as an Anglican priest, is regularly invited to preach and pray in Mosques. By building friendships, he has helped different ethnic communities come together and understand one another better.

In response to the homeless crisis in the city, Canon Sher has set up a Curry Club, and can be found on a Friday evening waiting on tables in his home, serving curries cooked by his wife, Rina. Money raised supports the homeless, and 70 rough sleepers were treated to a Christmas dinner in the church hall.

Falak’s latest project is to bring a Passion play to Manchester. With the support of his ethnic and interfaith contacts and the Passion Trust, the vision is taking shape. Manchester Passion will be held in the city centre on 8 April and will involve local churches and members of different ethnic communities.

Falak said, “I want to see the cross lifted up in the city, glorifying God! Jesus is hope for the Mancunian people.” 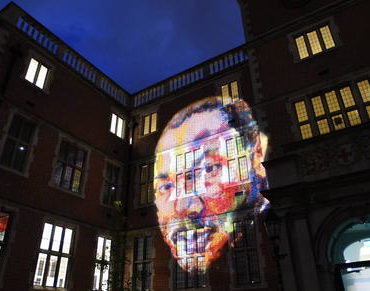 The city of Newcastle upon Tyne, UK, has launched a year-long commemoration to mark the 50th anniversary of Dr King receiving an honorary degree from Newcastle University.