The award, for the Most Innovative Fundraising Campaign, was accepted by members of the Marketing and Events Team, and Development Team from Durham Cathedral at the award ceremony this Tuesday, 29 November, hosted in London by Comedian Ed Byrne.

The awards, one of the key events in the voluntary sector calendar are organised by the Institute of Fundraising.

Durham Cathedral in LEGO had an initial fundraising target of £100,000, with the project smashing its target by raising over £300,000 for Open Treasure over a three year period. Bricks were added to the model by visitors from 182 different countries. The final brick was added on Monday 25 July, and the completed LEGO model remains on display in the Cathedral’s Undercroft Foyer, between the Cathedral Shop and Undercroft Restaurant.

The judges of the category said of Durham Cathedral in LEGO, “This campaign brought a smile to our faces! It was an extremely clever way to engage people and bring the appeal to life. The model was an innovative totalizer for the campaign and use of the model is an ongoing attraction. They created an incredibly different image of an appeal by a Cathedral and have demonstrated a willingness to share learnings with other organisations.”

The Very Reverend Andrew Tremlett, Dean of Durham, says “We are thrilled to have won such a prestigious award, particularly considering the exceptionally high calibre of charities and campaigns nominated alongside the Cathedral.”

“The simplicity of the LEGO Cathedral idea – £1 for one brick – in addition to the personal connection provided by being able to add your own brick to the model, it really captured the imagination of the local community, visitors from the UK and from across the world. At the beginning of the project it could not have foreseen how far-reaching the project would be, with donations coming in from visitors, people celebrating birthdays and weddings, school groups, and companies who wanted to sponsor sections of the model.

“This award is a testament to the hard work of all of the volunteers, well over sixty, who worked on the model for the last three years; Cathedral staff, in particular the Marketing and Events Team, and the Development Team; and of course would not have been possible without the incredible number of donations from the public. We are also grateful to Bright Bricks for designing the model and their support of the project.” 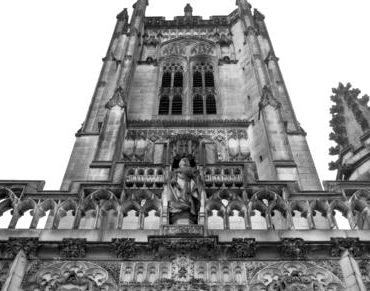