The Prince will then attend a Durham Cathedral concert honouring Sir Hubert Parry, a 19th and 20th century English composer whose music he has long admired, which will close with a rendition of Jerusalem, Sir Hubert’s most famous work.

The Prince’s visit will begin at The Church of St Mary the Less, the chapel of St John’s College, Durham University. There he will inspect the memorial stone of Dame Elizabeth Bowes (1651-1736), who lived in Durham and is an ancestor of His Royal Highness through Queen Elizabeth The Queen Mother, his grandmother.

His Royal Highness will unveil a commemorative plaque in honour of Dame Elizabeth at Bowes House, her former family home, which is now part of St John’s College.

The Prince will then visit Open Treasure, touring the exhibition experience before unveiling a plaque to declare it officially open.

His Royal Highness will then attend a major concert in Durham Cathedral, honouring the centenary of the death of Sir Hubert Parry (1848-1918).

The concert will be attended by 350 guests, who will all be invited to join in the singing of Jerusalem at the close.

Finally, the Prince will visit The DLI Collection Gallery at Durham University’s Palace Green Library. His Royal Highness will tour the Courage, Comrades and Community exhibition, which tells the history of the regiment through the stories of the soldiers who made it.

The Very Reverend Andrew Tremlett, Dean of Durham, said: “Open Treasure, located in the most intact set of medieval monastic buildings in the UK, has transformed how we tell the story of Durham Cathedral to visitors.

“We are thrilled that Prince Charles is officially opening it and look forward to welcoming him to the Cathedral.”

Professor Stuart Corbridge, Vice-Chancellor and Warden of Durham University, said: “We are very excited to be welcoming Prince Charles to Durham University and providing him an opportunity both to further enjoy the work of Sir Hubert Parry and to renew his friendship with our own Professor Jeremy Dibble.

“The large-scale rendition of Jerusalem is a spectacle we are looking forward to greatly.”

“We are privileged that he is taking the time to honour the life and work of his ancestor Dame Elizabeth Bowes. His visit will be a proud day in the history of St John’s College.”

His Royal Highness received an Honorary Doctorate of Civil Law from Durham University in 1998. The Prince of Wales last visited County Durham in 2012 and Sunderland in 2015. 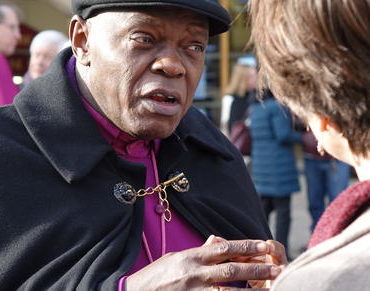 The Archbishop of York Dr John Sentamu is continuing to share his faith journey with all those he meets as part of his mission weekends across the Diocese of York and further afield in Cumbria and Newcastle.