So, let us start at the beginning. The apostles. These originally were the twelve men selected by Jesus at the start of his ministry.

These are the names of the twelve apostles: first, Simon (who is called Peter) and his brother Andrew; James son of Zebedee, and his brother John; Philip and Bartholomew; Thomas and Matthew the tax collector; James son of Alphaeus, and Thaddaeus; Simon the Zealot and Judas Iscariot, who betrayed him. (Matthew 10:2-4)

Then twelve became eleven, after Judas spilled his guts, then back to twelve again with the selection of Matthias by lots. Then Paul saw the risen Jesus and became one. Other apostles included Barnabas (Acts 14:14), Andronicus and Junias (Romans 16:7) and James (Galatians 1:19). Even Jesus himself was called an apostle in Hebrews 3:1.

So there weren’t many of them and they seemed to be unusually equipped.

The things that mark an apostle – signs, wonders and miracles – were done among you with great perseverance. (2 Corinthians 12:12)

They needed to be, because they were the ones chosen – literally sent out – to get God’s Church started. They needed all the spiritual help they could get and God was to intervene many times to get them out of scrapes and to show His power through their actions. The apostles were involved in teaching, preaching, healing, signs and wonders, deliverances, the planting of individual churches and the appointment of elders and missionaries.

Then there were the elders and deacons; the first tended to look after spiritual matters and the latter, practical matters and all had to be upstanding men of glowing character, the job description provided in detail in Titus 1, 1 Timothy 3 and 1 Timothy 5.

Yes, just two Church offices – elders and deacons. So what about the rest – the priests and pastors and bishops etc? For a start, the priestly role is very much Old Testament, so the Catholics and Orthodox Church of today have created an office of the Church that has absolutely no function at all in the New Covenant of Jesus Christ. As for pastors and bishops, despite these roles being cranked up these days to positions of prestige and authority, they are, in fact, just glorified elders! Please explain …

A modern-day pastor is viewed as the figurehead, the chief focus, for a church, with responsibilities usually wider than just the pastoral aspect. In the days of Peter and Paul the role was more commonly known as shepherd, with the job of “protecting the flock”. A pastor (shepherd) was not seen as a job title as it is now, simply an elder who specialised in keeping an eye over fellow Christians. Similarly a bishop (also known as overseer), may be a grand title these days, but then was simply an elder who had oversight of the flock. Nowadays, both roles seem to have climbed a rung on a hierarchy of power, with a pastor seen as being in charge of a church and a bishop having authority over a collection of churches. The truth is simpler, with the humbler origins of shepherd and overseer of a single flock.

For the final word on this subject we have an insight into the interchangeableness of these titles and the realisation that the first apostles were more concerned with the functions of the office rather than the office itself. Here’s what Peter wrote:

To the elders among you, I appeal as a fellow elder, a witness of Christ’s sufferings and one who also will share in the glory to be revealed: Be shepherds of God’s flock that is under your care, serving as overseers – not because you must, but because you are willing, as God wants you to be; not greedy for money, but eager to serve; not lording it over those entrusted to you, but being examples to the flock. (1 Peter 5:1-3)

The other church office was that of deacon. It was in Acts 6:1-7 that we read that the apostles needed others to take on more practical responsibilities, to wait on tables (or specifically, arrange food distribution) while they preached. So they chose seven men, so gifted. These were the first deacons. This doesn’t mean that these were to be the stay-at-home unsung toilers, while others did the exciting stuff. Two of these first deacons were Stephen, a man who did great wonders and miraculous signs among the people and Philip, the great evangelist and miracle worker in Samaria. God’s gifts to us are not dependent on our position, they are freely given to all.

(This is an abridged extract from Steve’s book To Life!)

How did the first Christians organise themselves? 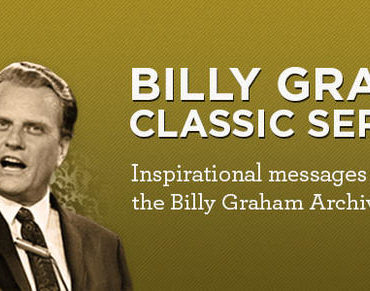 My Hope UK With Billy Graham

Billy Graham has preached the Gospel to more people in live audiences than anyone else in history - nearly 215 million people in more than 185 countries and territories, and hundreds of millions more have been reached through television, video, film, and webcasts.