Yeshua certainly considered himself a prophet.

“Jesus said to them, “Only in his hometown, among his relatives and in his own house is a prophet without honor.” (Mark 6:4)

“In any case, I must keep going today and tomorrow and the next day—for surely no prophet can die outside Jerusalem!” (Luke 13:33)

As did individuals who he ministered to.

“Finally they turned again to the blind man, “What have you to say about him? It was your eyes he opened.” The man replied, “He is a prophet.” (John 9:17)

And so did the people …

“The crowds answered, “This is Jesus, the prophet from Nazareth in Galilee.” (Matthew 21:11)

“They looked for a way to arrest him, but they were afraid of the crowd because the people held that he was a prophet.” (Matthew 21:46)

“They were all filled with awe and praised God. “A great prophet has appeared among us,” they said. “God has come to help his people.” (Luke 7:16) 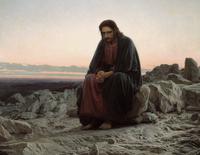 In Yeshua’s day, before he had a chance to show them otherwise, there was a conviction that prophecy had ceased. There were no prophets in the vein of the Old Testament giants such as Isaiah or Jeremiah. The only prophetic expectation was for the return of Elijah and the coming of the Messiah, the awaited Prophet mentioned earlier. This is demonstrated first by a question posed to John the Baptist:

And, after Yeshua had been observed for some time by the Jews of his day, this was their conclusion:

“After the people saw the miraculous sign that Jesus did, they began to say, “Surely this is the Prophet who is to come into the world.” (John 6:14)

As the only prophet awaited was the one prophesised by Moses, it seems that Yeshua, through his words and actions, fitted the bill, filled the vacancy.

The LORD said to me: “What they say is good. I will raise up for them a prophet like you from among their brothers; I will put my words in his mouth, and he will tell them everything I command him. If anyone does not listen to my words that the prophet speaks in my name, I myself will call him to account”. (Deuteronomy 18:17-19)

Yeshua demonstrated this further by indicating exactly where his words came from.

“Jesus answered, “My teaching is not my own. It comes from him who sent me. If anyone chooses to do God’s will, he will find out whether my teaching comes from God or whether I speak on my own.” (John 7:16-17)

How did Jesus show himself as prophet?

Premier Drive The former bass guitarist of BlueTree, the worship band that wrote 'God Of This City' that as picked up by Chris Tomlin, speaks out about why he left the group, upped sticks from Northern Ireland and moved to Canada. He shares with Loretta on Premier Drive what it was like to step out into the limelight as a solo artist and how life has changed since moving away.