For he himself is our peace, who has made the two groups one and has destroyed the barrier, the dividing wall of hostility, by setting aside in his flesh the law with its commands and regulations. His purpose was to create in himself one new humanity out of the two, thus making peace, and in one body to reconcile both of them to God through the cross, by which he put to death their hostility. He came and preached peace to you who were far away and peace to those who were near.For through him we both have access to the Father by one Spirit. (Ephesians 2:14-18)

Perhaps we should remind the Gentiles how they have utterly failed mostly to follow this narrative, with centuries of hostility towards the Jewish people, thus rendering these verses a nonsense in their application of them. It is bad enough that “Christians” have relentlessly persecuted the Jewish people for centuries, but there is still hostility towards Jews who have accepted Christ and now have access to the Father by the same Spirit. And it all started, as we saw in preceding articles, with the Gentile Church stripping away the Jewish roots of the faith, starting with the Sabbath and Passover. One New Man was cut off in its prime and a lop-sided Church has reigned ever since.

So we have read what should have happened and, in the following verses, we read what would have been the consequences:

Consequently, you are no longer foreigners and strangers, but fellow citizens with God’s people and also members of his household, built on the foundation of the apostles and prophets, with Christ Jesus himself as the chief cornerstone. In him the whole building is joined together and rises to become a holy temple in the Lord. And in him you too are being built together to become a dwelling in which God lives by his Spirit. (Ephesians 2:19-22) 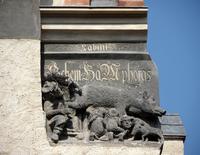 We must remember that Paul is still talking to the Gentiles here and reminding them of the immense privilege they have been granted by being added to God’s people. We are reminded of the Olive Tree picture in Romans 11:

If some of the branches have been broken off, and you, though a wild olive shoot, have been grafted in among the others and now share in the nourishing sap from the olive root, do not consider yourself to be superior to those other branches. If you do, consider this: You do not support the root, but the root supports you. (Romans 11:17-18)

Oh how Paul would have grieved if he had known how those in-grafted branches felt themselves so superior to the natural branches that the holy temple in the Lord, although supported by impressive Greek columns, would be sinking through lack of foundations and will eventually collapse unless things start to change. Doesn’t Paul remind them, in Romans 11:20, do not be arrogant, but tremble!?

God is infinitely patient. He has to be, considering the actions of the Gentile Church in the last nineteen centuries towards the Jewish people (and just about everyone else too). If ancient Israel can be exiled through idolatry and disobedience, how merciful God has been to the established Church for a catalogue of major sins and travesties that, by comparison, make the ancient Jews seem no more than naughty schoolboys.

Read that final Ephesians passage again. Isn’t the holy temple in the Lord meant to be one built together, Jew and Gentile? If our current Church is not built together – Jew and Gentile – how then can it honestly be a dwelling in which God lives by His Spirit? If you re-read the whole chapter you realise that Paul places the initiative at the feet of the Gentiles. He is almost saying, hey you are the new kids on the block, let’s see how you play nicely with the local kids. Well, they didn’t make a good job of it, did they?

You may want to now visit this YouTube video: https://www.youtube.com/watch?v=AbumtZy1Lsc&t=31s

Where has the church gone REALLY wrong?

Can watching movies be worship?

Inspirational Breakfast with Esther Higham TV Director and Film Critic Phil Mash has been giving Esther Higham his view of this year's Oscar Awards including several wins for British talent, and the most diverse awards yet.He also can't wait for cinemas to open again so he can worship at the movies...