It would be an exaggeration to describe Britain as already a secular society but our culture indicates that is where we are heading unless we can persuade national leaders and influencers to recognize trends and decide to arrest them. Polls suggest that 53% still believe in God but only 6% regularly go to church. At least 17% are committed atheists, a further 12% are agnostics and the remaining 19% believe in some vague higher power or spiritualism but not in the God of the Bible

We see the evidence of this in changes in British culture. A majority no longer accept claims that ‘there is only one way’. That includes political ideologies such as communism and fascism but also authoritative religious books such as the Bible, Torah and Koran. We see evidence of this in debates about same-sex marriage and transsexualism. The exaltation of the individual is seen in lifestyles. One third of London households are single person households and 57% in the City of London. Of course, the Bible sets a high value on the individual but sees us in the context of families and communities. It is but a short step from individualism to relativism, so that everyone does what is right in his or her own eyes.

It would be wrong to overlook the evidence that faith-based individuals and organisations have not all succumbed to these changes. Those working with drug and alcohol addicts, homeless people and rough sleepers, and people with disabilities and mental health problems are counter cultural. Christians founded the first hospices and ‘make poverty history’ campaign was a faith-inspired initiative. So too are Christian overseas aid and development organisations.

That said, secular thinking is over represented in the media, politics, education and the arts and these are four of the key change agents driving secularism in British culture. Humanists are campaigning to marginalize religious institutions. They are hostile to faith-based schools and religious education in State schools. They want the Bishops removed from the House of Lords and prayers in the House of Commons abolished. They also want the ‘Thought for the Day’ taken off the Radio 4 Today programme.

So far, secularists have failed to achieve some of these objectives but that does not mean that there have been no damaging consequences of secularization. Relationship breakdown is one of them. 42% of marriages now end in divorce (2018 statistic). The average marriage lasts 12.5 years whilst the average cohabiting couple break up after 37 months. A recent poll found that 25% of husbands and wives are no longer in love with their partners, are staying together for their children but will consider separation once their children leave home. If current trends continue 48% of British children will experience the breakdown of their parents’ relationship before they are 16. A majority of British children are now born out of wedlock.

Other consequences include a loss of community cohesion and social responsibility. Relativism and consumerist attitudes affect the way many think about such issues as abortion and euthanasia, leading to legislation that most Christians oppose.

So how can Christians live and make a difference in this cultural context? Do we have to learn a new ‘language’, like cross-cultural missionaries in order to share the Gospel with non-believers? The CPAS “Lost for Words” course is a possible mean to learn how to do that. Can churches do more to equip members to be ‘good news’ in their workplace and social settings? Can we make better use of social media to reach young people before they have become secularized?

Whatever means we use, Jesus’ injunction to “love your neighbour as yourself” (Matthew19:19; Luke 10:27) will surely be central to how we live and seek to influence others.  St Paul echoed this in his letter to the Romans. “Whatever other commandment there may be, are summed up in this one rule: ‘love your neighbour as yourself’. Love does no harm to its neighbour. Therefore, love is the fulfilment of the law”. (Romans 13:9-10) Whatever else we do as Christians in our increasingly secular culture we should eschew the religious ghetto and be active Christ-centered agents for change before Britain becomes a totally secular society. 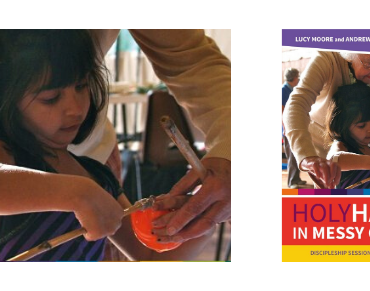 Lava Lamps, Copper Sulphate and the Breaking of Bread

Inspirational Breakfast with Esther Higham Andrew Roberts is a writer, speaker and Minister. He served as Fresh Expressions' Director of Training and co-authored the critically acclaimed fresh! an introduction to fresh expressions and pioneer ministry. He also edits Holy Habits Resources and Bible reading notes for BRF. Lucy Moore was in the team that started the first Messy Church. She works for BRF as the Messy Church team leader. She is responsible […]