The need for grace in politics

Hate speech has become common and Facebook, Twitter and Instagram seem not to have blocked this. The Home Affairs Select Committee and the Committee on Standards in Public Life have called on the social media agencies to remove extreme material from their sites. They respond that the volume of traffic on their sites makes that very difficult.

Even if editing out the offending messages were a simple task, distinguishing between the symptoms and the causes of hate speech is more necessary and important. Why do people want to think and express such nasty messages? One possible answer is the increasing evidence of extremism in British politics. This can be seen at two levels. In both the major parties there has been increasing evidence of movement to extremism.

Under the leadership of Jeremy Corbyn, actively supported by Momentum, the Labour Party has become more identified with far left socialism. John McDonnell, the Shadow Chancellor and loyal supporter of his leader, openly admits that his politics have been shaped by Marx, Lenin and Trotsky.  If elected, the Labour party promises extensive nationalisation of public services, to repeal legislation that bans strikes in essential public services and flying pickets, and to take powers to control the City institutions.

Brexit has also exposed a drift to the far right in the Conservative party. The likes of Boris Johnson and Jacob Rees-Mogg are implicitly threatening to bring down Theresa May’s Government if she does not deliver a complete break with the European Union. They have the support of up to 60 Tory MPs who think they are honouring the will of the small majority who voted for Britain to leave the EU. They conveniently ignore the fact that the referendum question made no mention of any details of our future relationship with our EU neighbours. They also ignore the likelihood that many of the communities that voted most strongly for Brexit will suffer more than those that did not.

Now it is important to recognise that both the Labour and Conservative parties include many MPs and ordinary members, probably even majorities, who are not extremists and do not indulge in hate speech or threaten anybody. The one Government defeat in the Committee stage of the EU (Withdrawal) Bill bore witness to this, as centrist Conservatives voted with Labour and Liberal Democrat MPs to ensure that MPs would have a vote on the outcome of the Brexit negotiations before they were finalised. For that they were labelled as traitors by their right wing colleagues. It is time the extremists realised that they are tiny minorities in the very small number who belong to a political party – little more than one million in a population of 65 million.

A new political party opposed to Brexit, called Renew, was launched this week. It is unlikely to make much difference unless it attracts the frustrated centrists in the established parties. They will be all too conscious of what happened when centrists left the Labour party in 1981 to found the Social Democrat party. Despite the fact that it was led by four prominent ex-Labour Ministers, it failed to attract sufficient votes in 1983 and 1987 and merged with the Liberal Party in 1988 to form the Liberal Democrat party.

There are Christians in all our major parties for whom we should be praying. Many of them are distinguished for their Christ-like graciousness and that grace is the only credible response to the extremist hatred that is all too evident in British politics today. 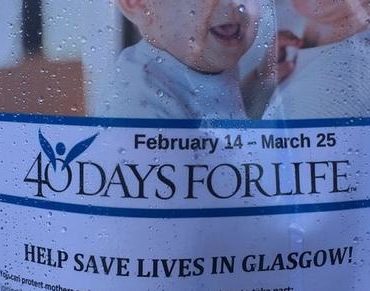 The appearance near a primary school in Glasgow of posters which advocate for a Christian pro-life charity has been criticised by pro-choice campaigners.