Time for realism and straight talking

Whilst it is not my role or wish to take sides in the Conservative leadership campaigns, it is my right as a citizen to question the statements and assumptions being made by the candidates from a neutral perspective. Some misleading statements are being made and need to be challenged.

The first is that we will leave the EU on 31st October whether or not we have a workable deal. That is by no means a certainty and anyone asserting it needs to explain how it will be delivered without bluster and obfuscation.  Jeremy Hunt sees a no deal Brexit as a last resort. “I have always said if the only way to deliver Brexit was via a no-deal then I would do so because the democratic damage of ignoring the referendum result would outweigh the economic risks of a no-deal exit.”

There is no majority in the House of Commons for leaving with no deal. MPs have twice rejected it and such Conservatives as Ken Clarke and Tobias Elwood would oppose it. Elwood has said, “I think a dozen or so Tory colleagues would be willing to back a vote of no confidence in the next Conservative leader if they tried to take Britain out of the EU without an agreement” That would almost certainly fail but if it triggered a vote of no confidence in the Government that could lead to a General Election. The Conservatives are currently in third place in the polls so why would any leader take the risk of defeat.

A second issue that needs explanation is how the hard border in Ireland can be avoided without a deal. Boris Johnson has said, “You solve the problem of free movement of goods across the Irish and Northern Irish and other borders to where they logically belong, and that is in the context of the free trade agreement that we’ll negotiate in the implementation period after we come out on 31st October.” The problem with that is that if we leave without a deal there will be no implementation period because that was part of the Withdrawal Agreement negotiated by Theresa May.

Both Hunt and Johnson assume that they can negotiate a new deal with the EU but the latter have already said bluntly the deal they negotiated with Theresa May, that has been rejected three times by the House of Commons, is the only one on offer. Moreover, the EU institutions are in a period of organizational change following the recent elections of the European Parliament. The key leaders of the EU, Donald Tusk, the President of the Council of Ministers, and Jean Claude Juncker, the President of the Commission, have both come to the end of their terms of office. The choices of their replacements will be the result of hard bargaining by the member states and no successors have yet been agreed. With whom will Hunt or Johnson negotiate in this vacuum before 31st October?

If we leave the EU without a deal tariffs would be imposed on UK goods and services in EU member states. Boris Johnson has denied this, claiming that WTO rule GATT24 would prevent this but Mark Carney, the Governor of the Bank of England has pointed out that GATT24 only applies where the parties already have a trade deal in place.

Thus a no-deal exit would not be supported by the House of Commons and the possibilities of negotiating a new deal with the EU before 31st October are slim if not out of the question. Both the contenders for leadership of the Conservative party and the nation need to face these realities and explain how they will deal with them and avoid the damage to the UK economy that a no-deal Brexit would incur. So far they have failed to do so.

The results of the election will be announced on 23rd July, Theresa May will resign as PM on 24th and recommend her successor to the Queen. Parliament recesses on 25th and does not return until 3rd September. Time is running out for any negotiations. We should pray for realism and straight talking by all those who might hold the nation’s future in their hands. 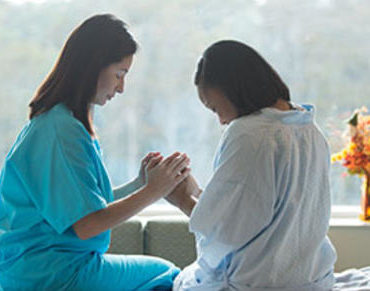 What is the importance of the prayer to the NHS…?

Inspirational Breakfast with Esther Higham Hospital chaplain ANN STEVENSON has recently retired after 26 years' serving in the National Health Service in Birmingham. She was a bit of a pioneer in her day being Elim's first hospital lead chaplain in the country. For ANN as she went about her chaplaincy duties Prayer was at the heart of everything she did.Our northern correspondent Ian Britton met up with her to find out about the importance of Prayer working in […]